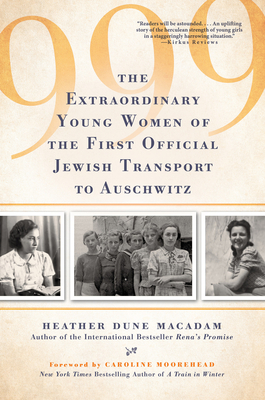 The untold story of some of WW2’s most hidden figures and the heartbreaking tragedy that unites them all. Readers of Born Survivors and A Train Near Magdeburg will devour the tragic tale of the first 999 women in Auschwitz concentration camp. This is the hauntingly resonant true story that everyone should know.

On March 25, 1942, nearly a thousand young, unmarried Jewish women, many of them teenagers, boarded a train in Poprad, Slovakia. Believing they were going to work in a factory for a few months, they were eager to report for government service and left their parents’ homes wearing their best clothes and confidently waving good-bye. Instead, the young women were sent to Auschwitz. Only a few would survive. Now acclaimed author Heather Dune Macadam reveals their stories, drawing on extensive interviews with survivors, and consulting with historians, witnesses, and relatives of those first deportees to create an important addition to Holocaust literature and women’s history.

“Against the backdrop of World War II, this respectful narrative presents a compassionate and meticulous remembrance of the young women profiled throughout. Recommended for all collections.” —Library Journal

“Staggering . . . profound. [Macadam’s] book also offers insight into the passage of these women into adulthood, and their children, as ‘secondhand survivors.’” —Gail Sheehy, New York Times bestselling author of Passages and Daring: My Passages

“An important addition to the annals of the Holocaust, as well as women’s history. Not everyone could handle such material, but Heather Dune Macadam is deeply qualified, insightful, and perceptive.” —Susan Lacy, creator of the American Masters series and filmmaker

“The story of these teenage girls is truly extraordinary. Congratulations to Heather Dune Macadam for enabling the rest of us to sit down and just marvel at how on earth they did it.”
—Anne Sebba, New York Times bestselling author of Les Parisiennes and That Woman