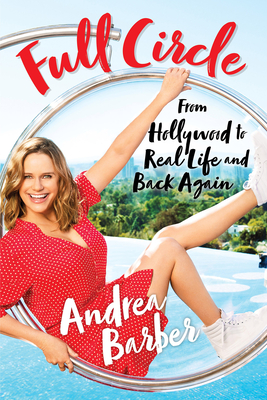 From Hollywood to Real Life and Back Again

Andrea Barber grew up in front of the world on the beloved sitcom Full House, but then abruptly left Hollywood. Why did she leave and what did she do for twenty years out of the spotlight before returning to television? Find out in her funny and inspiring memoir about fame, heartache, resilience--and the reboot of a lifetime...

Andrea Barber is known to millions worldwide as Kimmy Gibbler, star of the hit 90s sitcom Full House, and the Netflix sequel, Fuller House. In this funny, heartfelt book, Andrea takes readers behind the scenes of her odd Hollywood career and beyond. She shares how anxiety, particularly postpartum anxiety, derailed her life, and how she was able to take back control and serve as inspiration for others. Refreshingly honest and deeply personal, Andrea writes in a way that feels like catching up with an old friend. Get ready to laugh, reminisce, and finally get to know the woman behind the zany next door neighbor . . .

When Kimmy Gibbler burst into the Tanners' home on Full House in 1987, audiences immediately connected with the confident and quirky pre-teen character, played by ten-year-old actress Andrea Barber. During an eight-season run on one of the most popular series of the '80s and '90s, Andrea came of age in front of millions. But she was as far removed from her character as a girl can get. The introverted young star was plagued with self-doubt, insecurities, and debilitating anxieties that left her questioning her identity after the show's cancelation. Andrea wouldn't return to the public eye until 2016, for Fuller House. So what happened in those intervening decades that Andrea jokingly calls "the lost years?"

For starters, Andrea never stopped working. But it was on a series of life-changing transitions: earning a college degree, then a Master's, building a career in international education, getting married, and starting a family. She also faced some unforeseeable transitions: navigating a sudden divorce after nearly twelve years of marriage, and second-guessing her capabilities as a single mother. But it was her devastating bout with post-partum anxiety and depression that derailed Andrea's life--and became a crucial turning point.

Full Circle is a raw, refreshingly honest look into the life of a celebrity who has never been fully comfortable in the spotlight. Here Andrea shares her deeply personal struggles with mental health in a way she has never done before. She opens up about fighting her way back and finding solace--while finding herself--all before her life came full circle with her costars and lifelong friends on Fuller House. Sharing her journey from child star, to champion of mental health, and back to stardom, Andrea writes in a way that feels like catching up with an old friend.

You'll laugh, reminisce, and finally get to know the woman behind the zany next door neighbor.

"A great read from a multi-talented actress, author, and comedienne!"
--Jodie Sweetin

"Prepare to be entertained and inspired."
--Lori Gottlieb, New York Times bestselling author of Maybe You Should Talk to Someone: A Therapist, Her Therapist, and Our Lives Revealed

"Andrea speaks from her heart with language that every mom, every person, can relate to. . . . Wonderfully written."
--Karen Kleiman, Founder, The Postpartum Stress Center, author of Good Moms Have Scary Thoughts

Andrea Barber is best known for her role on the hit ABC series Full House as Kimmy Gibbler, the best friend of D.J. Tanner, which she played from 1987 to 1995. After Full House ended, Barber retired from acting to pursue a Bachelor's in English Literature at Whittier College and a Master's in Women's Studies at the University of York in York, England. She worked in the field of international education for several years before starting a family and raising two children. She has completed over 30 half marathons and 4 full marathons. She is also an advocate for mental health awareness and a NAMI spokeswoman. Andrea returned to Hollywood in 2015 to reboot her acting career on the current hit Netflix series, Fuller House. Follow Andrea on Instagram @andreabarber.
Loading...
or support indie stores by buying on