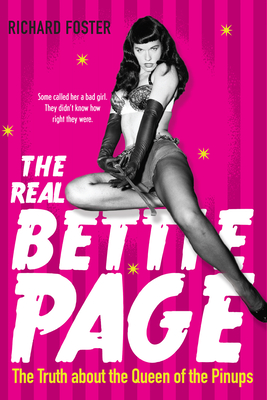 The Truth about the Queen of the Pinups

TWENTIETH ANNIVERSARY EDITION
UPDATED BY THE AUTHOR WITH A NEW EPILOGUE

She has been called the most photographed model in history. From her modest beginnings in Nashville to her legacy as a cult figure, here is the true story of America’s iconic pinup queen, legendary Playboy centerfold Bettie Page—including her stormy marriages, her trial for attempted murder, and her decade-long isolation in a California mental institution.

During the 1950s, Bettie set hearts ablaze with her killer curves and girl-next-door smile. Yet at the height of her popularity, with a promising acting career before her, she walked away. For more than thirty years, Bettie stayed hidden from the public eye, though she lived on in her fans’ memories, much like Marilyn Monroe and James Dean.

Journalist Richard Foster became the first reporter to contact Page during her long absence, and the first to tell her full story. Using interviews with those who knew her, and filled with uncommon knowledge and insights, The Real Bettie Page reveals both the fun flirt and fashion-forward counter-culture icon whose style continues to inspire today, as well as the intriguing and complex, flesh-and-blood woman behind her smiling photos.

While he was still a college journalism student, award-winning writer Richard Foster became the first reporter to track down and interview the legendarily reclusive pin-up model Bettie Page. His 1997 biography of her, The Real Bettie Page, was adapted into the 2006 HBO Films movie “The Notorious Bettie Page” starring Gretchen Mol. In the decades since, Foster has written and worked for numerous publications, including Style Weekly magazine. His writing ranges from celebrity profiles and feature articles to in-depth investigative pieces. Most recently, Foster hosted the true-crime podcast series “Southern Nightmare: The Hunt for the South Side Strangler,” the story of the first serial killer in U.S. history convicted on the basis of DNA evidence, available at www.southernnightmare.com. He can be found on Twitter and Instagram @RVAwriter. Foster, who has two adult sons, lives in Richmond, Virginia, with his wife and their four very needy cats.
or
Not Currently Available for Direct Purchase
Copyright © 2020 American Booksellers Association