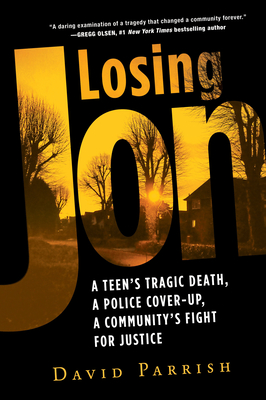 A Teen's Tragic Death, a Police Cover-Up, a Community's Fight for Justice

“The twists and turns read like a page-turning thriller, but Losing Jon is all fact. This is true crime at the highest of levels. Scary, heartbreaking and completely insightful.”
—Brad Meltzer, #1 New York Times bestselling author of The Escape Artist

David Parrish was in disbelief when he learned that nineteen-year-old Jon Bowie’s body had been found hanged from a backstop at the local high school’s baseball field and the death declared a suicide. David had known Jon and his twin brother since they were boys. He had coached them on the baseball field and welcomed them into his home for sleepovers with his own sons. However, when David learned how Jon’s body was found, he felt compelled to find the facts behind this incomprehensible tragedy.

Soon, David would learn of a brutal incident at a local motel where Jon and his brother had been severely beaten by police officers, the charges filed against those officers, and the months of harassment and intimidation Jon and his brother endured. Few in the utopian community of Columbia, Maryland, believed Jon could commit such a final act. Like many others, David wondered how a fateful night of teens blowing off steam could lead to such a tragic end. As law enforcement failed to find answers and seemed intent on preventing the truth from surfacing, David uncovered a system of cover-ups that could only lead to one conclusion—Jon’s death was an act of murder.

“A true page turner, filled with almost-too-unbelievable-to-be-true details of one community’s fight to find justice for one of its own . . . the issues raised, particularly when it comes to questions of police brutality and cover-ups, are very much relevant today.”
—New York Times bestselling author Lisa Pulitzer

David Parrish is a technical writer, former recreational-league baseball coach, and long-time resident of Columbia, Maryland, where he and his wife raised their two sons and still reside.  David grew up near Durham, North Carolina and graduated with a B.A. in English at the University of North Carolina. Learn more at davidkparrish.com.

Praise For Losing Jon: A Teen's Tragic Death, a Police Cover-Up, a Community's Fight for Justice…

“The twists and turns read like a page-turning thriller, but Losing Jon is all fact. This is true crime at the highest of levels. Scary, heartbreaking and completely insightful. See why the best stories are sometimes the real stories.”
—Brad Meltzer, #1 New York Times bestselling author of The Escape Artist

“Losing Jon takes you on a journey for truth that will have you questioning everything from start to finish. Broken trust with the police that have sworn to protect you, the unimaginable grief of a mother and the strength of a community that wants answers. David Parrish provides a daring examination of a tragedy that changed a community forever.”
—Gregg Olsen, #1 New York Times bestselling author

“Parrish debuts with a riveting personal story about a tragic death…. This account of a frustrating fight for justice should resonate with many true crime buffs.”
—Publishers Weekly
or support indie stores by buying on
Copyright © 2020 American Booksellers Association