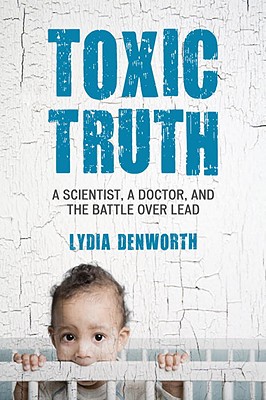 A Scientist, a Doctor, and the Battle over Lead

They didn't start out as environmental warriors. Clair Patterson was a geochemist focused on determining the age of the Earth. Herbert Needleman was a pediatrician treating inner-city children. But in the chemistry lab and the hospital ward, they met a common enemy: lead. It was literally everywhere-in gasoline and paint, of course, but also in water pipes and food cans, toothpaste tubes and toys, ceramics and cosmetics, jewelry and batteries. Though few people worried about it at the time, lead was also toxic.

In Toxic Truth, journalist Lydia Denworth tells the little-known stories of these two men who were among the first to question the wisdom of filling the world with such a harmful metal. Denworth follows them from the ice and snow of Antarctica to the schoolyards of Philadelphia and Boston as they uncovered the enormity of the problem and demonstrated the irreparable harm lead was doing to children. In heated conferences and courtrooms, the halls of Congress and at the Environmental Protection Agency, the scientist and doctor were forced to defend their careers and reputations in the face of incredible industry opposition. It took courage, passion, and determination to prevail against entrenched corporate interests and politicized government bureaucracies. But Patterson, Needleman, and their allies did finally get the lead out - since it was removed from gasoline, paint, and food cans in the 1970s, the level of lead in Americans' bodies has dropped 90 percent. Their success offers a lesson in the dangers of putting economic priorities over public health, and a reminder of the way science-and individuals-can change the world.

The fundamental questions raised by this battle-what constitutes disease, how to measure scientific independence, and how to quantify acceptable risk-echo in every environmental issue of today: from the plastic used to make water bottles to greenhouse gas emissions. And the most basic question-how much do we need to know about what we put in our environment-is perhaps more relevant today than it has ever been.

Praise For Toxic Truth: A Scientist, a Doctor, and the Battle over Lead…

Before most Americans had given a thought to lead poisoning, a geochemist named Clair Patterson and a passionate doctor, Herb Needleman, were learning just how widespread it was, and how damaging. Their work set the framework for the future examination of man-made toxins, and their scientific and political struggles for the truth set a pattern for future battles between industry and advocates over the significance of toxics. With plenty of gritty details, Lydia Denworth tells the story of these two giant lead-killers, shedding light on the foundations of a key issue in public policy.—Arthur Allen, author of Vaccine: The Controversial Story of Medicine's Greatest Lifesaver

"Toxic Truth is a compelling and forceful portrayal of the lives and pain of these two remarkable scientific pioneers. An impressively researched and well-documented book, it is an astonishing chronicle of one of the most insidious and avoidable health problems of our time." —Dr. Devra Davis, author of When Smoke Ran Like Water: Tales of Environmental Deception and the Battle against Pollution

"In Toxic Truth, Lydia Denworth has pulled off a rare feat: she's written a true page-turner, animated by a fascinating medical mystery, that's also a nuanced and immensely thoughtful look at how good ideas can overthrow orthodoxy—and ultimately make the world a better place."—Steven Johnson, author of The Ghost Map: The Story of London's Most Terrifying Epidemic—and How It Changed Science, Cities, and the Modern World

"The 'unearthing' of the problem of children's injury from environmental lead, by intrepid researchers such as Needleman and Patterson, makes for an intriguing chronicle. The pitfalls and challenges they encountered at every step, their persistence in the face of extraordinary attacks, are instructive for others who pursue the truth with the courage of their convictions."—Dr. Alan Woolf, Director, Pediatric Environmental Health Center at Children's Hospital, Boston, and Associate Professor of Pediatrics, Harvard Medical School

"Toxic Truth is an engrossing and inspiring story of how two courageous men shone the clear light of science on industry's effort to conceal the harm to our children—and to all of us—by lead in the environment."—Philip and Alice Shabecoff, authors of Poisoned Profits: The Toxic Assault on Our Children

Lydia Denworth is a former Newsweek reporter and People bureau chief. Her writing on science, education, and other social issues has appeared in the New York Times, Redbook, Health, and other publications. She is the author of two books, I Can Hear You Whisper: An Intimate Journey through the Science of Sound and Language and Toxic Truth: A Scientist, a Doctor, and the Battle over Lead. Visit her online at lydiadenworth.com
Loading...
or
Not Currently Available for Direct Purchase