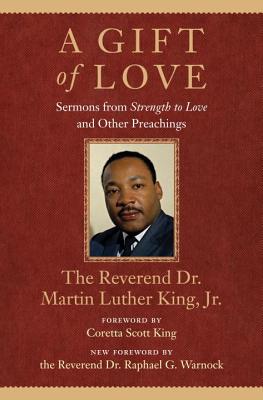 Sermons from Strength to Love and Other Preachings (King Legacy #7)

The classic collection of sixteen sermons preached and compiled by Dr. King

As Dr. King prepared for the Birmingham campaign in early 1963, he drafted the final sermons for Strength to Love, a volume of his best-known homilies. King had begun working on the sermons during a fortnight in jail in July 1962. Having been arrested for holding a prayer vigil outside Albany City Hall, King and Ralph Abernathy shared a jail cell for fifteen days that was, according to King, ‘‘dirty, filthy, and ill-equipped’’ and “the worse I have ever seen.” While behind bars, he spent uninterrupted time preparing the drafts for classic sermons such as “Loving Your Enemies,” “Love in Action,” and “Shattered Dreams,” and continued to work on the volume after his release.

A Gift of Love includes these classic sermons, along with two new preachings. Collectively they present King’s fusion of Christian teachings and social consciousness, and promote his prescient vision of love as a social and political force for change.

Praise For A Gift of Love: Sermons from Strength to Love and Other Preachings (King Legacy #7)…

“But be ye assured that we will wear you down by our capacity to suffer. One day we shall win freedom, but not only for ourselves. We shall so appeal to your heart and conscience that we shall win you in the process, and our victory will be a double victory.”
—From “Loving Your Enemies”

The Reverend Dr. Martin Luther King, Jr. (1929–1968), Nobel Peace Prize laureate and architect of the nonviolent civil rights movement, was among the twentieth century’s most influential figures. In 1954, Dr. King became pastor of the Dexter Avenue Baptist Church in Montgomery, Alabama, and in 1960, he joined his father as copastor of Ebenezer Baptist Church in Atlanta. One of the greatest orators in U.S. history, King was the author of several books, including Stride Toward Freedom, The Trumpet of Conscience, Why We Can’t Wait, and Where Do We Go from Here.

Coretta Scott King (1927–2006), the wife of Martin Luther King, Jr., was an author and a human rights activist. She helped lead the civil rights movement after King’s assassination, carrying the message of nonviolence and the dream of a beloved community to many countries and spearheading civil rights coalitions and foundations.

The Reverend Dr. Raphael G. Warnock is senior pastor of the historic Ebenezer Baptist Church, the spiritual home of the Reverend Dr. Martin Luther King, Jr.
Loading...
or support indie stores by buying on
(This book is on backorder)