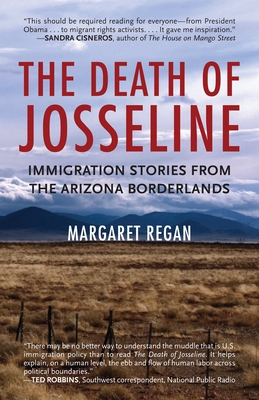 The Death of Josseline (Paperback)

Immigration Stories from the Arizona Borderlands

Dispatches from Arizona—the front line of a massive human migration—including the voices of migrants, Border Patrol, ranchers, activists, and others

For the last decade, Margaret Regan has reported on the escalating chaos along the Arizona-Mexico border, ground zero for immigration since 2000. Undocumented migrants cross into Arizona in overwhelming numbers, a state whose anti-immigrant laws are the most stringent in the nation. And Arizona has the highest number of migrant deaths. Fourteen-year-old Josseline, a young girl from El Salvador who was left to die alone on the migrant trail, was just one of thousands to perish in its deserts and mountains.

With a sweeping perspective and vivid on-the-ground reportage, Regan tells the stories of the people caught up in this international tragedy. Traveling back and forth across the border, she visits migrants stranded in Mexican shelters and rides shotgun with Border Patrol agents in Arizona, hiking with them for hours in the scorching desert; she camps out in the thorny wilderness with No More Deaths activists and meets with angry ranchers and vigilantes. Using Arizona as a microcosm, Regan explores a host of urgent issues: the border militarization that threatens the rights of U.S. citizens, the environmental damage wrought by the border wall, the desperation that compels migrants to come north, and the human tragedy of the unidentified dead in Arizona’s morgues.

Margaret Regan writes for the Tucson Weekly and has won a dozen journalism awards for border reporting, including two national prizes. She lives in Tucson.

Praise For The Death of Josseline: Immigration Stories from the Arizona Borderlands…

"This should be required reading for everyone-from President Obama . . . to migrant rights activists. . . . It gave me inspiration."-Sandra Cisneros, author of The House on Mango Street

"The many admirers of Enrique's Journey will find much to admire, and fear, in this powerful report."-Luis Alberto Urrea, author of The Devil's Highway: A True Story

"Regan puts a human face on the multiple problems created by desperate, poverty-stricken people entering the United States illegally to look for work, and the costly measures taken by the American government to secure its borders."-Kirkus Reviews

"Regan . . . has compiled a compelling chronicle of the flow of migrants from northern Mexico into the 'Tucson Sector' of Arizona, distilling the many facets of this phenomenon into an enlightening account."-Booklist

"There may be no better way to understand the muddle that is U.S. immigration policy than to read The Death of Josseline. It helps explain, on a human level, the ebb and flow of human labor across political boundaries."-Ted Robbins, Southwest correspondent, NPR
or support indie stores by buying on
Copyright © 2020 American Booksellers Association