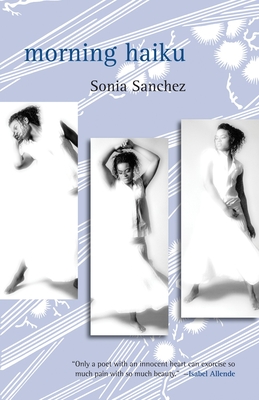 Poems of commemoration and loss for readers of all ages, from a leading writer of the Black Arts Movement and the American Poetry Society's 2018 Wallace Stevens Award–winner.

Sonia Sanchez's collection of haiku celebrates the gifts of life and mourns the deaths of revered African American figures in the worlds of music, literature, art, and activism. In her verses, we hear the sounds of Max Roach "exploding in the universe," the "blue hallelujahs" of the Philadelphia Murals, and the voice of Odetta "thundering out of the earth." Sanchez sings the praises of contemporaries whose poetic alchemy turns "words into gems": Maya Angelou, Richard Long, and Toni Morrison. And she pays homage to peace workers and civil rights activists from Rosa Parks and Congresswoman Shirley Chisholm to Brother Damu, founder of the National Black Environmental Justice Network. Often arranged in strings of twelve or more, the haiku flow one into the other in a steady song of commemoration. Sometimes deceptively simple, her lyrics hold a very powerful load of emotion and meaning.

There are intimate verses here for family and friends, verses of profound loss and silence, of courage and resilience. Sanchez is innovative, composing haiku in new forms, including a section of moving two-line poems that reflect on the long wake of 9/11. In a brief and personal opening essay, the poet explains her deep appreciation for haiku as an art form. With its touching portraits and by turns uplifting and heartbreaking lyrics, Morning Haiku contains some of Sanchez's freshest, most poignant work.

“Sonia Sanchez is a lion in literature’s forest. When she writes she roars, and when she sleeps other creatures walk gingerly.”
—Maya Angelou

“Only a poet with an innocent heart can exorcise so much pain with so much beauty.”
—Isabel Allende

“Sonia Sanchez is one of Philadelphia’s most celebrated poets and public figures. . . . She played an important role in the civil-rights and Black Arts movements and has read her poetry all over the world. That poetry is full of history, music, and song.”
—John Timpane, Philadelphia Inquirer

“Sanchez is at her finest in Morning Haiku. . . . Through the collection, Sanchez gives thanks, praise and meditation to black artists.”
—Tara Murtha, Philadelphia Weekly

“The poetry of Sonia Sanchez is full of power and yet always clean and uncluttered. It makes you wish you had thought those thoughts, felt those emotions, and, above all, expressed them so effortlessly and so well.”
—Chinua Achebe

"Her songs of destruction and loss scrape the heart; her praise songs thunder and revitalize. We need these songs for our journey together into the next century."
—Joy Harjo

“Sonia Sanchez’s poetry is a must for all readers. Period.”
—Essence

“Sanchez’s haiku is as simple and clear as breathing, but with everything that brings energy and vivacity to being alive.”
—Rain Taxi Review of Books

Sonia Sanchez is poet, activist, scholar, and formerly the Laura Carnell Professor of English and Women's Studies at Temple University, and is currently a poet-in-residence there. Her numerous honors include the American Poetry Society's 2018 Wallace Stevens Award. she is the author of sixteen books, including Like the Singing Coming off the Drums, Does Your House Have Lions?, Wounded in the House of a Friend, Shake Loose My Skin, and Morning Haiku.
Loading...
or
Not Currently Available for Direct Purchase