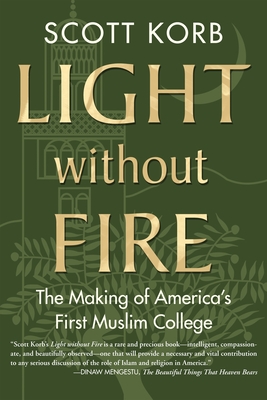 In the fall of 2010, anti-Muslim furor in the United States reached a breaking point, capping a decade in which such sentiment had surged. Loud, angry crowds gathered near New York’s Ground Zero to protest plans to build an Islamic cultural center, while a small-time Florida minister appeared on national television almost nightly promising to celebrate the anniversary of 9/11 with the burning of Korans. At the same time, fifteen devout Muslims quietly gathered in a basement in Berkeley, California, to execute a plan that had been coming together for over a decade: to found Zaytuna College, “Where Islam Meets America.” It would be the nation’s first four-year Muslim liberal arts college, its mission to establish a thoroughly American, academically rigorous, and traditional indigenous Islam.

In Light without Fire, Scott Korb tells the story of the school’s founders, Sheikh Hamza Yusuf and Imam Zaid Shakir, arguably the two most influential leaders in American Islam, “rock stars” who, tellingly, are little known outside their community. Korb also introduces us to Zaytuna’s students, young American Muslims of all stripes who admire—indeed, love—their teachers in ways college students typically don’t and whose stories, told for the first time, signal the future of Islam in this country.

From a heady theology classroom to a vibrant storefront mosque, from the run-down streets Oakland to grand ballrooms echoing with America’s most powerful Muslim voices, Korb follows Zaytuna’s students and teachers as they find their place and their voice. He ultimately creates an intimate portrait of the school and provides a new introduction to Islam as it is being lived and re-envisioned in America. It’s no exaggeration to say that here, at Zaytuna, are tomorrow’s Muslim leaders.

Scott Korb is the author of Life in Year One: What the World Was Like in First-Century Palestine and coauthor of The Faith Between Us. He teaches at the New School and at New York University and lives with his family in New York City.


Praise For Light without Fire: The Making of America's First Muslim College…

“Will Islam become an American religion or remain permanently estranged? Will Muslims in America develop an identity that contributes to their country or one that emphasizes isolation and opposition? Scott Korb knows just how crucial these questions are, and in Light Without Fire tells the story of the leaders and animating ideas behind America’s first Muslim liberal arts college—an institution seeking to build an American Islam—in all its fits and starts, and in prose that is both clear and compelling. I for one could not put it down—it is essential and riveting reading.”
—Eboo Patel, Founder and President, Interfaith Youth Core, author of Sacred Ground: Pluralism, Prejudice and the Promise of America

“With the warm generosity of an attentive host, and the critical yet respectful eye of a keen journalist, Scott Korb has given us an entertaining and illuminating look into the nation’s first Muslim college.”
—Wajahat Ali, author of The Domestic Crusaders and lead author of the investigative report “Fear, Inc.: The Roots of the Islamophobia Network in America”

"This is an important book, and one as original as its fascinating subject. Like Roy Mottahedeh's classic Mantle of the Prophet, Light Without Fire is about education in both the broadest and deepest senses and about Islam in a particular place and time. Only here that place is America, now, a country desperately in need of stories about its own Islam. We are lucky to have a writer as erudite and engaged as Scott Korb to bring us this one." —Jeff Sharlet, New York Times bestselling author of The Family and Sweet Heaven When I Die

“A moving portrait of a little known but hugely significant coordinate in America’s spiritual geography. For this journey into the heart of 21st-century Islam, Scott Korb is the perfect companion—not just a tour guide with ready answers to any question, but a fellow pilgrim leading the way to deeper understanding. Light Without Fire is at once a fascinating account of Muslims living their faith in the US, and a universal story of the call to make tradition new.”
—Peter Manseau, author of Songs for the Butcher’s Daughter

"How many stories in American religious experience are truly new?  Not so many, and Scott Korb's story of Zaytuna College is one of them, expertly and presciently told." —Paul Elie, author of The Life You Save May Be Your Own

"Scott Korb’s Light Without Fire is a rare and precious book—intelligent, compassionate, and beautifully observed—one that will provide a necessary and vital contribution to any serious discussion of the role of Islam and religion in America." —Dinaw Mengestu, author of The Beautiful Things that Heaven Bears

“Readers interested in Islam in America or the dynamics of Islamic education will find the book fascinating.” —Publisher's Weekly
or
Not Currently Available for Direct Purchase
Copyright © 2020 American Booksellers Association