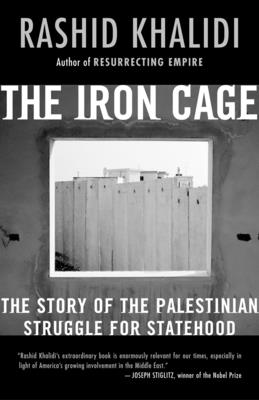 The Story of the Palestinian Struggle for Statehood

At a time when a lasting peace between the Palestinians and the Israelis seems virtually unattainable, understanding the roots of their conflict is an essential step in restoring hope to the region. In The Iron Cage, Rashid Khalidi, one of the most respected historians and political observers of the Middle East, homes in on Palestinian politics and history. By drawing on a wealth of experience and scholarship, Khalidi provides a lucid context for the realities on the ground today, a context that has been, until now, notably lacking in our discourse.

The story of the Palestinian search to establish a state begins in the mandate period immediately following the breakup of the Ottoman Empire, the era of British control, when fledgling Arab states were established by the colonial powers with assurances of eventual independence. Mandatory Palestine was a place of real promise, with unusually high literacy rates and a relatively advanced economy. But the British had already begun to construct an iron cage to hem in the Palestinians, and the Palestinian leadership made a series of errors that would eventually prove crippling to their dream of independence.

The Palestinians' struggle intensified in the stretch before and after World War II, when colonial control of the region became increasingly unpopular, population shifts began with heavy Jewish immigration from Eastern Europe, and power began to devolve to the United States. In this crucial period, Palestinian leaders continued to run up against the walls of the ever-constricting iron cage. They proved unable to achieve their long-cherished goal of establishing an independent state—a critical failure that set a course for the decades that followed, right through the eras of the Palestinian Liberation Organization, the Palestinian Authority, and Hamas. Rashid Khalidi's engrossing narrative of this torturous history offers much-needed perspective for anyone concerned about peace in the Middle East.

Praise For The Iron Cage: The Story of the Palestinian Struggle for Statehood…

At heart a historical essay, an effort to decide why the Palestinians . . . have failed to achieve an independent state.—Steven Erlanger, New York Times

"A first-rate and up-to-date historical and political analysis of the Palestinian predicament."—Publishers Weekly's 100 Best Books issue

"In a refreshing contrast to the yammering bazaar of complaint and allegation that has dominated American public discussion of the Middle East since Sept. 11, 2001, The Iron Cage is a patient and eloquent work, ranging over the whole of modern Palestinian history from World War I to the death of Yasser Arafat. Reorienting the Palestinian narrative around the attitudes and tactics of the Palestinians themselves, Khalidi lends a remarkable illumination to a story so wearily familiar it is often hard to believe anything new can be found within."—Jonathan Shainin, Salon

"Khalidi uses history to provide a clear-eyed view of the region and assess the prospects for peace. He strives successfully for even-handedness."—Anthony Lewis, Pulitzer Prize-winning author of Gideon's Trumpet and Make No Law

"A work of forceful historical analysis written in a spirit of self-examination."—Bashir Abu-Manneh, The Nation

"Magisterial in scope, meticulous in its attention to detail, and decidedly dispassionate in its analysis, The Iron Cage is destined to be a benchmark of its genre." —Joel Schalit, Tikkun

"Khalidi, tackling 'historical amnesia,' brilliantly analyses the structural handicap which hobbled the Palestinians throughout 30 years of British rule . . . Khalidi restores the Palestinians to something more than victims, acknowledging that for all their disadvantages, they have played their role and can (and must) still do so to determine their own fate." —Ian Black, Guardian

Rashid Khalidi is the author of seven books about the Middle East, including Palestinian Identity, Brokers of Deceit, Resurrecting Empire, The Iron Cage, and Sowing Crisis. His writing on Middle Eastern history and politics has appeared in the New York Times, Boston Globe, Los Angeles Times, Chicago Tribune, and many journals. For his work on the Middle East, Professor Khalidi has received fellowships and grants from the John D. and Catherine T. MacArthur Foundation, the Ford Foundation, the Woodrow Wilson International Center for Scholars, the American Research Center in Egypt, and the Rockefeller Foundation, among others. He is the Edward Said Professor of Modern Arab Studies at Columbia University in New York and is editor of the Journal of Palestine Studies.
Loading...
or support indie stores by buying on