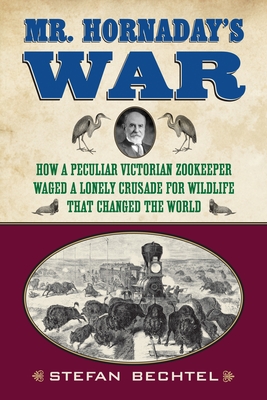 He was complex, quirky, pugnacious, and difficult. He seemed to create enemies wherever he went, even among his friends. A fireplug of a man who stood only five feet eight inches in his stocking feet, he began as a taxidermist and an adventurer who tracked tigers in Borneo with friendly headhunters, lead crocodile-hunting expeditions in the Orinoco, and scouted the last remaining bison in the Montana territories.

William Temple Hornaday (1854–1937) was also a man ahead of his time. He was the most influential conservationist of the nineteenth century, second only to his great friend and ally Theodore Roosevelt. When this one-time big-game collector witnessed the wanton destruction of wildlife prevalent in the Victorian era, he experienced an awakening and devoted the rest of his life to protecting our planet’s endangered species. Hornaday founded the National Zoo in Washington, D.C., served for thirty years as director of the renowned Bronx Zoo, and became a fierce defender of wild animals and wild places. He devoted fifty years to fighting gun manufacturers, poachers, scandalously lax game-protection laws, and the vast apathy of the American public. He waged the “Plume Wars” against the feathered-hat industry and is credited with having saved both the Alaskan fur seal and the American bison from outright extinction.

Mr. Hornaday’s War restores this major figure to his rightful place as one of the giants of the modern conservation movement. But Stefan Bechtel also explores the grinding contradictions of Hornaday’s life. Though he crusaded against the wholesale slaughter of wildlife, he was at one time a trophy hunter, and what happened in 1906 at the Bronx Zoo, when Hornaday displayed an African man in an “ethnographic exhibit,” shows a side of him that is as baffling as it is repellant. This gripping book takes an honest look at a fascinating, enigmatic man who both represented and transcended his era’s paradoxical approach to wildlife, and who profoundly changed the course of the conservation movement for generations to come.

Praise For Mr. Hornaday's War: How a Peculiar Victorian Zookeeper Waged a Lonely Crusade for Wildlife That Changed the World…

“Essential for anyone interested in U.S. conservation history and the wildlife protection movement ... A landmark biography.” —Douglas Brinkley, author of The Wilderness Warrior: Theodore Roosevelt’s Crusade for America

“A fascinating book . . . We have W. T. Hornaday to thank for a nation richer with wildlife today as a result of his work a century ago. Stefan Bechtel has done a masterful job telling us the story of one of America’s forgotten heroes, from his field explorations to the establishment of the Bronx Zoo and his battles in Congress. This book must be read by anyone interested in history and the environment.”—Cristián Samper, director of the Smithsonian Institution’s National Museum of Natural History

“William Temple Hornaday is a name we’ve forgotten, and that’s almost a crime, as he was the first truly successful eco-activist. While nineteenth-century America was wiping out species after species virtually for the fun of it, Hornaday gave voice to the animals’ agony and dragged several back from the brink. Stefan Bechtel has vividly resurrected Hornaday—a hero for those who care for the fate of the earth.”—Robert L. O’Connell, author of The Ghosts of Cannae

“Stefan Bechtel tells William Hornaday’s story with zest and a great eye for detail. Mr. Hornaday’s War offers adventure, political maneuvering, a stellar cast of characters, and a nuanced portrait of the crusader who called himself ‘the most defiant devil that ever came to town.’”—Henry Wiencek, author of An Imperfect God: George Washington, His Slaves, and the Creation of America

Stefan Bechtel is the author of ten books, his most recent including Tornado Hunter and Roar of the Heavens. A founding editor of Men’s Health magazine, his work has appeared in Esquire and the Washington Post, among other publications. He lives in Free Union, Virginia.