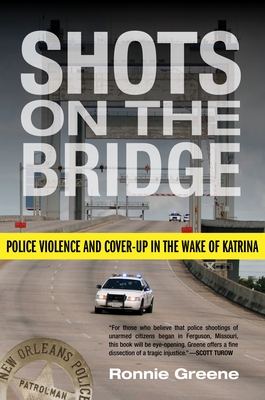 Shots on the Bridge

Police Violence and Cover-up in the Wake of Katrina

A harrowing story of blue on black violence, of black lives that seemingly did not matter.

On September 4, 2005, six days after Hurricane Katrina’s landfall in New Orleans, two groups of people intersected on the Danziger Bridge, a low-rising expanse over the Industrial Canal. One was the police who had stayed behind as Katrina roared near, desperate to maintain control as their city spun into chaos. The other was the residents forced to stay behind with them during the storm and, on that fateful Sunday, searching for the basics of survival: food, medicine, security. They collided that morning in a frenzy of gunfire.

When the shooting stopped, a gentle forty-year-old man with the mind of a child lay slumped on the ground, seven bullet wounds in his back, his white shirt turned red. A seventeen-year-old was riddled with gunfire from his heel to his head. A mother’s arm was blown off; her daughter’s stomach gouged by a bullet. Her husband’s head was pierced by shrapnel. Her nephew was shot in the neck, jaw, stomach, and hand.  Like all the other victims, he was black—and unarmed.

Before the blood had dried on the pavement, the shooters, each a member of the New Orleans Police Department, and their supervisors hatched a cover-up. They planted a gun, invented witnesses, and charged two of their victims with attempted murder. At the NOPD, they were hailed as heroes.

Shots on the Bridge explores one of the most dramatic cases of police violence seen in our country in the last decade—the massacre of innocent people, carried out by members of the NOPD, in the brutal, disorderly days following Hurricane Katrina. It reveals the fear that gripped the police of a city slid into anarchy, the circumstances that drove desperate survivors to the bridge, and the horror that erupted when the police opened fire. It carefully unearths  the cover-up that nearly buried the truth.  And finally, it traces the legal maze that, a decade later, leaves the victims and their loved ones still searching for justice.

This is the story of how the people meant to protect and serve citizens can do violence, hide their tracks, and work the legal system as the nation awaits justice.

Winner of the 2015 Investigative Reporters and Editors Book Award

Praise For Shots on the Bridge: Police Violence and Cover-up in the Wake of Katrina…

“Greene expertly constructs the narrative of events during the shooting and through the federal trial of the officers involved, who received sentences of up to 65 years. . . .A poignant and skillful examination of a case that adds to the ongoing public debate about corrupt police practices, the militarization of local law enforcement, and convoluted legal decisions.”
—Kirkus Reviews

“This engrossing tale is shockingly reminiscent of more recent examples of police misconduct and should appeal to civic-minded readers in New Orleans and elsewhere.”
—Library Journal

“Shots on the Bridge is a poignant excavation of this case...a harrowingly taut 228-page book that bracingly covers what happened before, during, and after the shooting.”
—Johns Hopkins Magazine

“As the issue of police brutality continues to dominate much of the national discourse, Greene’s timely book reminds readers that due process for killer cops can mean more than the lives of dead victims.”
—The Intercept

“For those who believe that police shootings of unarmed citizens began in Ferguson, Missouri, this book will be eye-opening. Greene offers a fine dissection of a tragic injustice and the understandable—and often unacknowledged—fears of police which underlie so many of these events.”
—Scott Turow

“Ronnie Greene has penetrated the blue code and brought light to one of the horrific cases of police misconduct in modern US history, and the victims' families' passionate and unyielding pursuit for justice in the aftermath of the tragedy of Katrina. His book is a must-read for those who seek reforms today to make urban policing more just and fair.”
—Marc H. Morial, president and CEO, National Urban League

“For everyone who wonders how police officers could inflict deadly violence on the people they are paid to protect, Ronnie Greene has pieced together, in meticulous detail, this epic case study: a tragedy of errors, fears, and lies that cannot be ignored.”
—Amanda Ripley, author of The Smartest Kids in the World and The Unthinkable

Ronnie Greene is an investigative journalist who edits in-depth stories for Reuters and teaches graduate writing at Johns Hopkins University. Before joining Reuters, he edited a 2014 Pulitzer Prize-winning investigation for the Center for Public Integrity. His other honors include the IRE Medal, an Emmy Award, and the Harvard Goldsmith Prize for Investigative Reporting. Greene spent much of his career at the Miami Herald, and he is author of Night Fire: Big Oil, Poison Air, and Margie Richard’s Fight to Save Her Town. Shots on the Bridge is his second book.
or
Not Currently Available for Direct Purchase