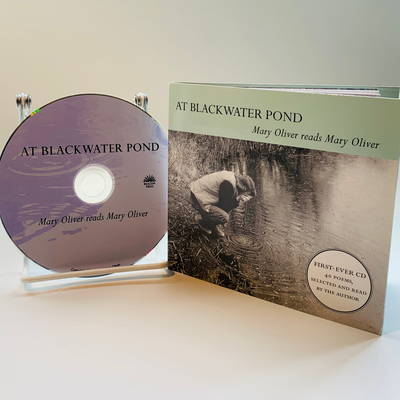 One of the astonishing aspects of Oliver's work is the consistency of tone over this long period. What changes is an increased focus on nature and an increased precision with language that has made her one of our very best poets. --Stephen Dobyns, New York Times Book Review

Mary Oliver has published fifteen volumes of poetry and five books of prose in the span of four decades, but she rarely performs her poetry in live readings. Now, with the arrival of At Blackwater Pond, Mary Oliver has given her audience what they've longed to hear: the poet's voice reading her own work. In this beautifully produced compact disc, Mary Oliver has recorded forty of her favorite poems, nearly spanning the length of her career, from Dream Work through her newest volume, New and Selected Poems, Volume Two. The package is shrink-wrapped so that the elegant clothbound audiobook can takes its place on the poetry shelf. It also includes a fifteen-page booklet with an original essay, "Performance Note," photos of the author at Blackwater Pond, and a full listing of the poems and their sources.

Much of the work of the poet is a mystery, but the last labor is clear; it is the deliverance of the poem. Often this happens through a manuscript or a book, but it can occur in a vocal way also. Has everyone at some time looked up the original meaning of performance? It means, says Webster, 'to finish, to complete.' The poem is meant to be given away, best of all by the spoken presentation of it; then the work is complete. Which makes performance sound, does it not, like part of the life-work of the poem, which I think it is. As if the poem itself had an independent life, or the endless possibility of its own life, in minds other than the poet's, which I think it has.--Mary Oliver, from "Performance Note," an original essay first published in At Blackwater Pond

A private person by nature, Mary Oliver (1935–2019) gave very few interviews over the years. Instead, she preferred to let her work speak for itself. And speak it has, for the past five decades, to countless readers. The New York Times recently acknowledged Mary Oliver as “far and away, this country’s best-selling poet.” Born in a small town in Ohio, Oliver published her first book of poetry in 1963 at the age of 28; No Voyage and Other Poems, originally printed in the UK by Dent Press, was reissued in the United States in 1965 by Houghton Mifflin. Oliver has since published twenty books of poetry and six books of prose. As a young woman, Oliver studied at Ohio State University and Vassar College, but took no degree. She lived for several years at the home of Edna St. Vincent Millay in upper New York state, companion to the poet’s sister Norma Millay. It was there, in the late ’50s, that she met photographer Molly Malone Cook. For more than forty years, Cook and Oliver made their home together, largely in Provincetown, Massachusetts, where they lived until Cook’s death in 2005. Over the course of her long and illustrious career, Oliver has received numerous awards. Her fourth book, American Primitive, won the Pulitzer Prize for Poetry in 1984. She has also received the Shelley Memorial Award; a Guggenheim Fellowship; an American Academy and Institute of Arts and Letters Achievement Award; the Christopher Award and the L.L. Winship/PEN New England Award for House of Light; the National Book Award for New and Selected Poems; a Lannan Foundation Literary Award; and the New England Booksellers Association Award for Literary Excellence. Oliver’s essays have appeared in Best American Essays 1996, 1998, 2001; the Anchor Essay Annual 1998, as well as Orion, Onearth and other periodicals. Oliver was editor of Best American Essays 2009. Oliver’s books on the craft of poetry, A Poetry Handbook and Rules for the Dance, are used widely in writing programs. She is an acclaimed reader and has read in practically every state as well as other countries. She has led workshops at various colleges and universities, and held residencies at Case Western Reserve University, Bucknell University, University of Cincinnati, and Sweet Briar College. From 1995, for five years, she held the Catharine Osgood Foster Chair for Distinguished Teaching at Bennington College. She has been awarded Honorary Doctorates from The Art Institute of Boston (1998), Dartmouth College (2007) and Tufts University (2008).
Loading...
or support indie stores by buying on
(This book is on backorder)