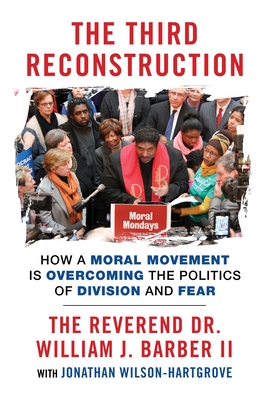 Praise For The Third Reconstruction: How a Moral Movement Is Overcoming the Politics of Division and Fear…

“William J. Barber II is both a pastor and a prophet. The Third Reconstruction is a powerful account of a new movement in North Carolina that is teaching us four things: that ideological extremism which targets the most vulnerable is best countered by a moral movement and not a partisan one, that single issue agendas must flow into integrated visions for social justice and the common good, that multiracial movements are needed to build both racial and economic justice, and that the willingness to sacrifice outside of politics is the best way to change the inside of politics. Rev. Barber also shows us how “faith acts” can transform political actions. Barber’s unquenchable fire for justice shines through every page of this remarkable book. I strongly recommend The Third Reconstruction, which shows how a moral, multiracial, and sacrificial movement can change the future of our democracy.”
—Jim Wallis, author of The UnCommon Good, president of Sojourners, and editor-in-chief of Sojourners magazine

“The Reverend William Barber knows what ails us and—what is rare in this day and age—he knows what to do about it. When ordinary people see past their differences and come together, there is nothing on earth that can stop them, not even the power of organized money.”
—Thomas Frank, author of Pity the Billionaire and What’s the Matter With Kansas?

Jonathan Wilson-Hartgrove is cofounder of the Rutba House for the formerly homeless and director of the School for Conversion. His books include Common Prayer: A Liturgy for Ordinary Radicals (with Shane Claiborne) and The New Monasticism.
Loading...
or
Not Currently Available for Direct Purchase