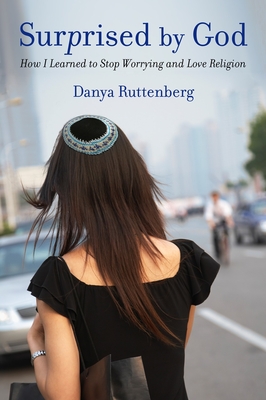 How I Learned to Stop Worrying and Love Religion

At thirteen, Danya Ruttenberg decided she was an atheist. As a young adult, she immersed herself in the rhinestone-bedazzled wonderland of late 1990s San Francisco-drinking smuggled absinthe with wealthy geeks and plotting the revolution with feminist zinemakers. But she found herself yearning for something she would eventually call God.

Surprised by God is a memoir of a young woman's spiritual awakening and eventual path to the rabbinate, a story of integrating life on the edge of the twenty-first century into the discipline of traditional Judaism, without sacrificing either. It's also an unflinchingly honest guide to the kind of work that goes into developing a spiritual practice-and it shows why, perhaps, doing this in today's world requires more effort than ever.

Praise For Surprised by God: How I Learned to Stop Worrying and Love Religion…

"[A] thoughtful and articulate memoir . . . seeking a truth that transcends doctrine."—Laura Stokes, Bust

"At every point, Ruttenberg is sharp in her insights about the world and about herself."—Tikkun

"[Ruttenberg's] decription of her growing awareness of the power of ritual, the support of community, and religion as relationship will resonate with all sorts of spiritual seekers."—Publishers Weekly

"You don't have to be religious to enjoy Ruttenberg's thoughts and words. Her discussions about feminism, community, spirituality, identity, and family are thoughts that can inspire and attract anyone. . . . Surprised by God is an honest memoir about a beautifully complex woman finding her own way through spiritual practice."—Chelsey Clammer, Feminist Review

"Ruttenberg's memoir . . . is indicative of a whole generation of young, unaffiliated American Jews yearning to learn more about their Judaism, but apprehensive about compromising who they have come to be."—Matthew Wagner, The Jerusalem Post

"[A] beautiful memoir . . . it's entirely relatable, which in my experience, is unusual for a religious text. It's young. It's hip. And it's still profoundly serious."—Courtney Martin, feministing.com

"In Surprised by God, [Ruttenberg] narrates her own spiritual journey, in which feminism is a given and the value of self-expression a non-negotiable. . . . Gently, Ruttenberg lets the reader in on the surprising lesson of her journey: practicing a religion may change you-and this is not a bad thing!"—Ann Braude, Women's Review of Books

"[A] frank and well-written book . . . This remarkable odyssey of radical change is candidly described with extraordinary wit and noteworthy introspection. All readers will learn from this powerful book, regardless of whether or not they are religious."—Morton I. Teicher, Jewish Journal

"A revealing and thought provoking glimpse inside the mind of a young seeker."—JP, Jewish Book World

"Danya Ruttenberg's memoir . . . is really fantastic: well-written, engaging, skating that line between the personal and the universal with surprising grace."—Andrea Useem, Religion Writer

"Danya Ruttenberg shares the story of her journey toward embracing observant Judaism. What makes this story fascinating and urgent is that Ruttenberg never stops thinking and asking hard questions. She reminds us that loving religion is a matter of heart and soul-and brain. And that it something to which I say, Amen."—Leora Tanenbaum, author of Taking Back God: American Women Rising Up for Religious Equality

"Danya Ruttenberg marshals beautiful writing and a prodigious intellect, and, leavening it all with a hefty dose of wit, tells a compelling story that has something to teach everyone who picks it up, regardless of how spiritual or religious (or not) they are."—Lisa Jervis, cofounder of Bitch

"Ruttenberg's honesty, depth, wit, and eloquence light up every page."—Carol Lee Flinders, author of Enduring Lives: Portraits of Women and Faith in Action

"The philosopher in me loves the unfettered and deep intellectual challenges to which Ruttenberg subjects religion in general and Judaism in particular. The rabbi in me appreciates how she wrestles with Judaism in as intense a way as Jacob wrestled with the angel. The person in me loves her unmitigated integrity and honesty. All in all, Surprised by God is truly a treat!"—Rabbi Elliot Dorff, Ph.D., author of Knowing God: Jewish Journeys to the Unknowable

"[Surprised by God] is refreshingly mature in a world of religious fundamentalism and extremism. Ruttenberg's search for meaning in an often superficial American culture should inspire readers to embark on their own spiritual paths, and Ruttenberg herself is living proof that discovering God and even religion does not necessarily mean losing one's inner core."—Rabbi Haviva Ner-David, Ph.D., author of Life on the Fringes: A Feminist Journey Toward Traditional Rabbinic Ordination

Rabbi Danya Ruttenberg is the author of Suprised by God: How I Learned to Stop Worrying and Love Religion and 2016 National Jewish Book Award finalist Nurture the Now: Finding Spirituality in the Frustration, Boredom, Tears, Poop, Desperation, Wonder, and Radical Amazement of Parenting and editor of several books including Yentl's Revenge: The Next Wave of Jewish Feminism. She has been published in a wide variety of books and periodicals, including Encyclopedia Judaica, Best Jewish Writing 2002, the San Francisco Chronicle, Salon, Bitchfest, and The Women's Movement Today: An Encyclopedia of Third-Wave Feminism. A contributing editor to both Lilith and Women in Judaism, Ruttenberg received rabbinic ordination from the Zeigler School of Rabbinic Studies in Los Angeles in 2008. Find her online at www.danyaruttenberg.net.
Loading...
or support indie stores by buying on