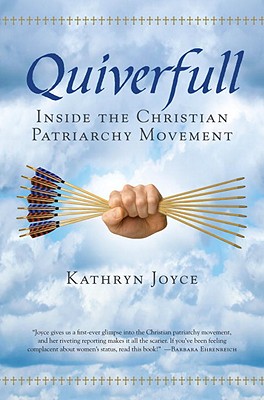 Inside the Christian Patriarchy Movement

Kathryn Joyce's fascinating introduction to the world of the patriarchy movement and Quiverfull families examines the twenty-first-century women and men who proclaim self-sacrifice and submission as model virtues of womanhood—and as modes of warfare on behalf of Christ. Here, women live within stringently enforced doctrines of wifely submission and male headship, and live by the Quiverfull philosophy of letting God give them as many children as possible so as to win the religion and culture wars through demographic means.

Kathryn Joyce is a freelance journalist whose writing has appeared on Salon and in the "Nation, Mother Jones, Newsweek, Double X, "and other publications. She lives in New York City. "From the Trade Paperback edition."

Praise For Quiverfull: Inside the Christian Patriarchy Movement…

Engrossing . . . Skillfully reported by journalist Kathryn Joyce, Quiverfull has echoes of The Handmaid's Tale. Unfortunately, it's not fiction.—Rebecca Braverman, Bust

"An invaluable contribution to understanding how religious fundamentalism still stands in the way of sexual justice . . . An urgent call to dismantle fundamentalism's hold on our politics, and our policy-making."—Sarah Posner, American Prospect online

"Insightful . . . A call to reexamine our own beliefs . . . The issues Joyce's book raises are fundamental to our identity as human beings, and as Christians. Perhaps they could stand some reexamination."—Elrena Evans, Christianity Today

"Riveting and deeply disturbing. This important book shines a light on a corner of the Christian right that has taken misogyny to sadomasochistic extremes, and reveals the sexual anxieties so often underlying modern fundamentalism."—Michelle Goldberg, author of Kingdom Coming

"Joyce gives us a first-ever glimpse into the Christian patriarchy movement, and her riveting reporting makes it all the scarier. If you've been feeling complacent about women's status, read this book!—Barbara Ehrenreich

"A groundbreaking investigation . . . Future historians and journalists will owe Joyce a debt of gratitude for her foray into this still nascent religious group."—Publishers Weekly