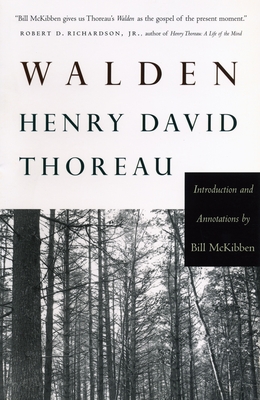 First published in 1854, Henry David Thoreau's groundbreaking book has influenced generations of readers and continues to inspire and inform anyone with an open mind and a love of nature. With Bill McKibben providing a newly revised Introduction and helpful annotations that place Thoreau firmly in his role as cultural and spiritual seer, this beautiful edition of Walden for the new millennium is more accessible and relevant than ever.

Bill McKibben gives us Thoreau's Walden as the gospel of the present moment. --Robert D. Richardson, Jr., author of Henry Thoreau: A Life of the Mind

'[Thoreau] says so many pithy and brilliant things, and offers so many piquant, and, we may add, so many just, comments on society as it is, that this book is well worth the reading, both for its actual contents and its suggestive capacity.' --A. P. Peabody, North American Review, 1854

'[Walden] still seems to me the best youth's companion yet written by an American, for it carries a solemn warning against the loss of one's valuables, it advances a good argument for traveling light and trying new adventures, it rings with the power of powerful adoration, it contains religious feeling without religious images, and it steadfastly refuses to record bad news.' --E. B. White, Yale Review, 1954

'Bill McKibben gives us Thoreau's Walden as the gospel of the present moment.' -Robert D. Richardson, Jr., author of Henry Thoreau: A Life of the Mind

Henry David Thoreau (1817-1862) was a writer and philosopher as well as a naturalist. Walden is considered his masterpiece.

Bill McKibben is the author of Enough: Staying Human in an Engineered Age as well as The End of Nature and The Age of Missing Information. He lives with his family in the Adirondack Mountains.
Loading...
or
Not Currently Available for Direct Purchase