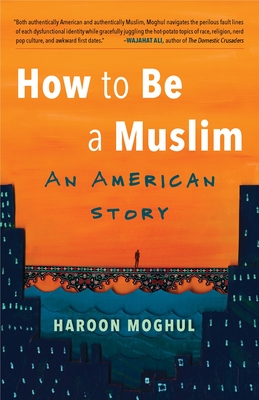 How to Be a Muslim

A searing portrait of Muslim life in the West, this “profound and intimate” memoir captures one man’s struggle to forge an American Muslim identity (Washington Post)

Haroon Moghul was thrust into the spotlight after 9/11, becoming an undergraduate leader at New York University’s Islamic Center forced into appearances everywhere: on TV, before interfaith audiences, in print. Moghul was becoming a prominent voice for American Muslims even as he struggled with his relationship to Islam. In high school he was barely a believer and entirely convinced he was going to hell. He sometimes drank. He didn’t pray regularly. All he wanted was a girlfriend.

But as he discovered, it wasn’t so easy to leave religion behind. To be true to himself, he needed to forge a unique American Muslim identity that reflected his beliefs and personality. How to Be a Muslim reveals a young man coping with the crushing pressure of a world that fears Muslims, struggling with his faith and searching for intellectual forebears, and suffering the onset of bipolar disorder. This is the story of the second-generation immigrant, of what it’s like to lose yourself between cultures and how to pick up the pieces.

Praise For How to Be a Muslim: An American Story…

“In sometimes heartbreaking and staggering prose laced with subtle and sardonic humor, Moghul (The Order of Light) shares what it looks like to hammer out an American Muslim identity. As Moghul loses himself and seeks himself, readers will appreciate his story as a second-generation Muslim immigrant, but also as a representative of the modern man: searching, groping, discovering, losing, loving, hoping, dreaming, and suffering. Highly recommended for its candor and relatability, this book will invite readers to fathom what it means to grasp Islam—and religion and spirituality in general.”
—Publishers Weekly, Starred Review

“This personal account will appeal to fans of memoirs as well as those interested in learning more about the historical, geopolitical, and cultural roots of Islam.”
—Library Journal

“It’s the fascinating tension between what others perceive Moghul to be and what Moghul feels that results in a work of biting self-awareness.”
—Foreword Reviews

“A searing, intimate portrait of a brilliant but troubled young man struggling with spiritual, psychological and physical challenges while trying to balance a commitment to his religion’s tenets and succeed in a secular society.”
—The Jewish Week

“Rarely does a book come along that captures the complicated nature of Muslim life in the West with such probing clarity and authenticity. Haroon Moghul’s How to Be a Muslim: An American Story is perfectly titled: part memoir, part history lesson, part philosophy. It is a profound and intimate book—the story of a single American Muslim that also illustrates the fears and strengths of a community.”
—Ausma Zehanat Khan, Washington Post

“Both authentically American and authentically Muslim, Moghul navigates the perilous fault lines of each dysfunctional identity while gracefully juggling the hot-potato topics of race, religion, nerd pop culture, and awkward first dates. Between Homer Simpson and Muhammad Iqbal, Rumi and Kobe Bryant, Haroon Moghul’s profound, honest, entertaining, and hilarious memoir emerges as an important voice for our times. The title, How to Be a Muslim, doesn’t do this revealing and impressive memoir justice. It should simply be called ‘How to Be a Human.’ By showing us his warts, pain, flaws, insecurities, demons, and hypocrisies, Moghul ultimately reveals the joy, wonder, and purpose of living and being in the messy, conflicted playground that is modern life.”
—Wajahat Ali, author of The Domestic Crusaders

“How to Be a Muslim is at once a poignant spiritual memoir, a gripping tale of love and survival, and a pop-culture-infused retelling of an ancient tradition. Packed with wit, wisdom, and wry intelligence, Haroon Moghul’s story should be read by anyone who wants to understand the complexity and reality of religion in America today.”
—Peter Manseau, author of One Nation, Under Gods

“How to Be a Muslim: An American Story details Haroon Moghul’s journey from nonbelief to faith. With capacious wit and impassioned logic, this timely memoir portrays the forging of a young man’s identity. An essayist, broadcaster, and commentator on Islamic affairs, Moghul takes a personal turn describing early rifts between his inward and outward life. He was born to Punjabi parents from Pakistan, and raised as a Muslim in New England despite his lack of connection to God. Thematic chapters detail his struggle to reconcile his family’s religion with his longing for a normal teenage life; attempts at relationships; his college years; excursions to Mecca, Medina, Jerusalem, Cairo, and Dubai; bipolar disorder; divorce; and other topics. No matter the event under discussion, it’s the fascinating tension between what others perceive Moghul to be and what Moghul feels that results in a work of biting self-awareness.”
—Karen Rigby, The Forward Reviews

Haroon Moghul builds Muslim-Jewish engagement at the Shalom Hartman Institute. He’s written for the Washington Post, the Guardian, Time, Foreign Policy, Haaretz, and CNN. He and his wife want to move back to New York.