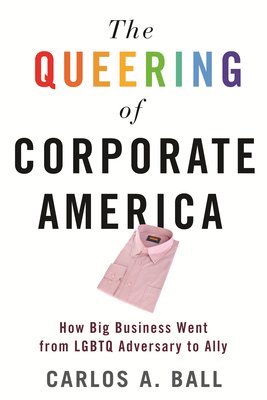 The Queering of Corporate America

How Big Business Went from LGBTQ Adversary to Ally

An accurate picture of the LGBTQ rights movement’s achievements is incomplete without this surprising history of how corporate America joined the cause.

Legal scholar Carlos Ball tells the overlooked story of how LGBTQ activism aimed at corporations since the Stonewall riots helped turn them from enterprises either indifferent to or openly hostile toward sexual minorities and transgender individuals into reliable and powerful allies of the movement for queer equality. As a result of street protests and boycotts during the 1970s, AIDS activism directed at pharmaceutical companies in the 1980s, and the push for corporate nondiscrimination policies and domestic partnership benefits in the 1990s, LGBTQ activism changed big business’s understanding and treatment of the queer community. By the 2000s, corporations were frequently and vigorously promoting LGBTQ equality, both within their walls and in the public sphere. Large companies such as American Airlines, Apple, Google, Marriott, and Walmart have been crucial allies in promoting marriage equality and opposing anti-LGBTQ regulations such as transgender bathroom laws.

At a time when the LGBTQ movement is facing considerable political backlash, The Queering of Corporate America complicates the narrative of corporate conservatism and provides insights into the future legal, political, and cultural implications of this unexpected relationship.

Praise For The Queering of Corporate America: How Big Business Went from LGBTQ Adversary to Ally…

“[Ball] delivers both an insightful history and an excellent road map for any group seeking progressive social change.”
—Publishers Weekly

“Carlos Ball takes up the fascinating question of why, at the turn of the twenty-first century, corporations shifted from being the targets of pro-LGBT activism to being the sources of that activism. The answer is a tale of morals and markets in which the corporation emerges as an ‘unlikely hero’ . . . Only someone with Ball’s knowledge of that movement could have recognized this complicated protagonist and afforded it such a subtle biography.”
—Kenji Yoshino, author of Covering: The Hidden Assault on Our Civil Rights

“In this insightful, deeply engaging book, Carlos Ball shows how the influence of big business was harnessed to promote LGBTQ equality, becoming a bulwark against homophobic and exclusionary laws. This is a must-read for anyone interested in the future of American politics.”
—Adam Winkler, author of We the Corporations

“Ball masterfully tells the stories that inevitably led to a fundamental shift in corporate America’s relationship with its employees, its customers, and with American law and policy.”
—Mary Bonauto, Civil Rights Project director for GLAD, GLBTQ Legal Advocates & Defenders

“A must-read for anyone seeking to harness the power of business to drive change in the new economy.”
—Aaron Hurst, author of The Purpose Economy

“Ball makes a powerful case for LGBTQ activism aimed at the private sector while critically assessing the values and risks of corporations engaging in public policy issues in a democracy. This is a beautifully written and compelling book for anyone who is interested in the role companies can play in promoting social change and reforms for the betterment of society.”
—Alice Korngold, author of A Better World Inc. and CEO of Korngold Consulting

“Carlos Ball explores the colorful history, the smart playbook of tactics, and the combination of values and self-interest that have encouraged activists and businesses to join forces again and again to make corporations engines of progress . . . A concise, clear resource on what works in improving the corporate world and how to move forward.”
—Evan Wolfson, founder of Freedom to Marry and author of Why Marriage Matters

Carlos A. Ball is Distinguished Professor of Law and the Judge Frederick Lacey Scholar at Rutgers University. An expert on LGBTQ rights, he is the author of several books, including The First Amendment and LGBT Equality and From the Closet to the Courtroom. He lives with his family in Brooklyn, New York.
Loading...
or support indie stores by buying on