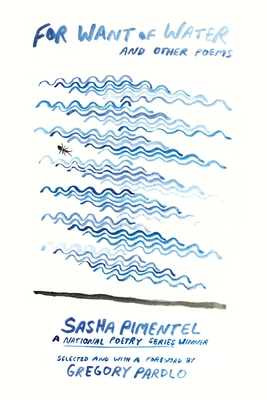 For Want of Water (Paperback)

and other poems (National Poetry Series #2)

Searing verses set on the Mexican border about war and addiction, love and sexual violence, grief and loss, from an American Book Award–winning author.  Selected by Gregory Pardlo as winner of the National Poetry Series.

El Paso is one of the safest cities in the United States, while across the river, Ciudad Juárez suffers a history of femicides and a horrific drug war. Witnessing this, a Filipina’s life unravels as she tries to love an addict, the murders growing just a city—but the breadth of a country—away. This collection weaves the personal with recent history, the domestic with the tragic, asking how much “a body will hold,” reaching from the border to the poet’s own Philippines. These poems thirst in the desert, want for water, searching the brutal and tender territories between bodies, families, and nations.

Sasha Pimentel is also the author of Insides She Swallowed, winner of the 2011 American Book Award. Born in Manila and raised in the United States and Saudi Arabia, she is a professor of poetry and creative nonfiction in the bilingual MFA Program at the University of Texas at El Paso.

Gregory Pardlo’s many awards include the Pulitzer Prize for his book Digest.

Praise For For Want of Water: and other poems (National Poetry Series #2)…

“In this urgent and lyrically astute new compilation, Philippines-born Pimentel, winner of the American Book Award for Insides She Swallowed, writes about the huge divide between El Paso, TX, and murder-slicked, drug war-ravaged Juarez directly across the Rio Grande. . . . Affecting and well wrought; Pimentel is a poet to watch.”
—Library Journal

“[Pimentel] excels at crafting a gorgeous language that drapes around the coarseness of the world.”
—Publishers Weekly

“Sasha Pimentel threads the complex and intricate geographies of lives across borders: Wyoming, Montparnasse, Saudi Arabia, Ilocos, Manila, but primarily El Paso and Ciudad Juárez in Mexico, where there have been more than forty-eight thousand documented fatalities and more than five thousand disappeared in relation to the drug trade. . . . The crossings Pimentel speaks of are perilous, but I am glad to have her as a guide, because she has the capacity for finding the smallest lights in the incinerated cities, shining through glass or the throats of pipes.”
—Luisa A. Igloria, author of Ode to the Heart Smaller Than a Pencil Eraser

“The poetry of Sasha Pimentel is visceral, haunting, searing. This is a poet who sees what most of us would rather not see. Her vision ranges from the thousands of women murdered in Juárez to the single boy dragging the body of his mother, dead of dehydration, across the border into New Mexico. In language of fierce compassion and tenderness, Pimentel humanizes the dehumanized. And oh, how we need such poems.”
—Martín Espada, author of Vivas to Those Who Have Failed

“Sasha Pimentel writes evocatively of our irksome obsession—the Mexican border as riddled, tempestuous demarcation between faith and melancholy, expectation and despondency, shadow and glow. El Paso and Ciudad Juárez cling to opposite sides of a hellish boundary—and the poet crafts an existence emboldened by that fracture, trumpeting the triumphs and hazards of a love that defies its ragged edict. No other poet has dared this landscape with such a deft and intrepid touch, conjuring an expansive, revelatory and indispensable read. Nothing—nothing—in these pages has been done before.”
—Patricia Smith, author of Incendiary Art
or support indie stores by buying on
Copyright © 2020 American Booksellers Association