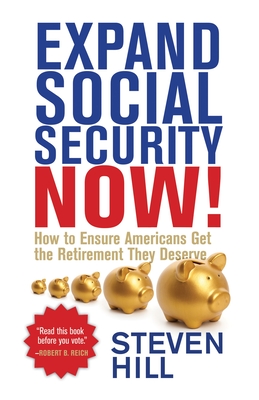 How to Ensure Americans Get the Retirement They Deserve

Social Security is bankrupting us. It’s outdated. It’s a Ponzi scheme. It’s stealing from young people. These are some of the biggest myths and lies about one of the most successful programs in our nation’s history. Three-quarters of Americans depend heavily on Social Security in their elderly years and nearly half would be living in poverty without it. But as important and popular as it is, Social Security has become a political football. A well-financed campaign—supported by conservatives, special interest groups, and even leading Democrats—has lobbied for cuts and significant “entitlement reform,” falsely proclaiming that Social Security is going broke. Policy expert Steven Hill argues that Social Security should not only be defended, it should be substantially expanded. Here he proposes how we can double the monthly benefit and how to pay for it by closing many of the tax loopholes and deductions that disproportionately favor the wealthy few.

Praise For Expand Social Security Now!: How to Ensure Americans Get the Retirement They Deserve…

“Read this book before you vote. Few issues are more important to your personal economic future. Steven Hill shows what’s at stake, and he offers solutions that Americans of all stripes can agree on.”
—Robert B. Reich, author of Saving Capitalism: For the Many, Not the Few

“Steven Hill has written a barn burner of a book. Or perhaps I should say ‘myth buster,’ because he systematically demolishes the false justifications for slashing Social Security. In place of misplaced animus and misleading arguments, he offers a strong case for dramatically expanding America’s most successful domestic program in an age of rising inequality and widespread financial insecurity.”
—Jacob S. Hacker, coauthor of American Amnesia: How the War on Government Led Us to Forget What Made America Prosper

“Steven Hill has written a vigorous defense of Social Security, the country’s most important social program. While most political debate in recent years has focused on ways to cut Social Security or privatize it, Hill goes in the opposite direction and argues for a robust expansion. Hill proposes a Social Security program that would be adequate by itself to support a middle-class retirement.”
—Dean Baker, cofounder of the Center for Economic and Policy Research, and author of Getting Back to Full Employment: A Better Bargain for Working People

“Expand Social Security Now! is a must-read. It is about the soul of our nation and what kind of society we want to be. Steven Hill lays it out plainly and powerfully, and shows what we can do about it.”
—Katrina vanden Heuvel, author of Meltdown: How Greed and Corruption Shattered Our Financial System and How We Can Recover

“Expand Social Security Now! is engaging, thought-provoking, and compelling. Hill’s bold plan to double Social Security benefits is a brilliant response to our looming retirement-income crisis, and to the nation’s rising income inequality. The book is a must-read for all those who hope to enjoy an independent and dignified retirement.”
—Nancy J. Altman, coauthor of Social Security Works!

“Steven Hill has produced a dynamite handbook for angry Americans who seek to take back democracy. The true contest is not Republicans versus Democrats. It is the American people versus Washington. And this is the sleeper issue the people can win. The governing elites in both parties are trying to eviscerate Social Security—arguably the most successful and most popular program created by the federal government. Hill explains why the political insiders and their Wall Street patrons are wrong about Social Security. He shows us how to mobilize to defeat the power elites and expand Social Security rather than destroy it.”
—William Greider, author of author of Come Home, America: The Rise and Fall (and Redeeming Promise) of Our Country

“The ability of a people to retire with dignity is the hallmark of a great nation, and with the inadequate 401(k)s of the Inequality Era, our nation is falling short. Steven Hill’s proposal to expand a twentieth-century idea for a twenty-first-century labor market is at once commonsense and radical.”
—Heather C. McGhee, president of Demos

“This book is terrific! Steven Hill proposes specific ways to expand Social Security and make it fairer for everyone. He also busts the myth that Social Security is ‘broke’ and shows why it matters more than ever in this election year—especially for anyone who wants to be elected to public office, or even the presidency.”
—Stephanie Taylor, cofounder of the Progressive Change Campaign Committee

Steven Hill is a Senior Fellow with the New America Foundation and a Holtzbrinck Fellow at the American Academy in Berlin. He is the author of six books, including Raw Deal: How the “Uber Economy” and Runaway Capitalism Are Screwing American Workers, which was selected by The Globalist as one of the Top Ten Books of 2015. His op-ed’s, articles and media interviews have appeared in the New York Times, Washington Post, Wall Street Journal, The Atlantic, Politico, CNN, C-SPAN, BBC, Financial Times, Guardian, Bloomberg News, Fox News, National Public Radio, The Nation, Salon, Slate, Observer, Fast Company, Business Insider, HuffingtonPost, Le Monde, Die Zeit, Al Jazeera and many others. His other books include Europe’s Promise: Why the European Way Is the Best Hope in an Insecure Age and 10 Steps to Repair American Democracy. He is a co-founder of FairVote/Center for Voting and Democracy. His website is www.Steven-Hill.com and you can find him on Twitter @StevenHill1776.
Loading...
or
Not Currently Available for Direct Purchase