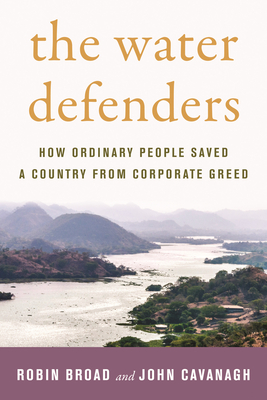 How Ordinary People Saved a Country from Corporate Greed

At a time when countless communities are resisting powerful corporations—from Flint, Michigan, to the Standing Rock Reservation, to Didipio in the Philippines, to the Gualcarque River in Honduras—The Water Defenders tells the inspirational story of a community that took on an international mining corporation at seemingly insurmountable odds and won not one but two historic victories.

In the early 2000s, many people in El Salvador were at first excited by the prospect of jobs, progress, and prosperity that the Pacific Rim mining company promised. However, farmer Vidalina Morales, brothers Marcelo and Miguel Rivera, and others soon discovered that the river system supplying water to the majority of Salvadorans was in danger of catastrophic contamination. With a group of unlikely allies, local and global, they committed to stop the corporation and the destruction of their home.

Based on over a decade of research and their own role as international allies of the community groups in El Salvador, Robin Broad and John Cavanagh unspool this untold story—a tale replete with corporate greed, a transnational lawsuit at a secretive World Bank tribunal in Washington, violent threats, murders, and—surprisingly—victory. The husband-and-wife duo immerses the reader in the lives of the Salvadoran villagers, the journeys of the local activists who sought the truth about the effects of gold mining on the environment, and the behind-the-scenes maneuverings of the corporate mining executives and their lawyers. The Water Defenders demands that we examine our assumptions about progress and prosperity, while providing valuable lessons for those fighting against destructive corporations in the United States and across the world.

Praise For The Water Defenders: How Ordinary People Saved a Country from Corporate Greed…

“Broad and Cavanagh offer a practical David-versus-Goliath playbook for those who would mobilize both domestic and international forces to halt corporate abuses and to place the long-term welfare of communities above short-term financial gain.”
—Foreign Affairs

“Demonstrates the potential of nonviolent campaigns to protect the interests of local communities against corporate powers.”
—Maryknoll Magazine

“The book is an environmentalist playbook, a how-to guide for activists seeking to defeat a power structure that is rigged in favor of their opponents.”
—The American Prospect

“To anyone tempted to think there is nothing an ordinary individual can do to make a difference, this story offers a powerful wake-up call.”
—Christian Century

“If you’re in need of some inspiration . . . look no further than this crucial and absorbing account of the ordinary people in El Salvador who won big against a seemingly insurmountable international mining corporation.”
—Ms. Magazine

“A fast-paced account of environmental justice and determination in the face of challenging odds.”
—Library Journal

“Broad and Cavanagh . . . expose in granular detail and with great compassion the deadly, dangerous, and daunting legal and legislative juggernaut faced by those forced to defend and protect their most precious natural resource from the fallout of industrial greed and corruption.”
—Booklist

“An inspirational story that will echo around the world.”
—Center for Biological Diversity

“One of the most painstakingly and lovingly-detailed case studies of people-based resistance to environmental depredation.”
—Journal of Peasant Studies

“Rife with valuable detail about the mobilizations, negotiations, alliance building, international campaigns, and legal maneuvers that stopped the Pacific Rim mining concession and led to the national ban.”
—Sierra Magazine

“Part history, part environmental organizing case study, the book chronicles the community’s struggle against the mine from the early 2000s to the campaign’s unlikely conclusion in 2017, when El Salvador became the first country in Latin America to completely ban metal mining.”
—National Catholic Reporter

“Reads like a page-turning mystery novel . . . . [T]he best account I have read of the workings of an obscure global institution designed to undermine any obstacles to the mobility of global corporations.”
—Foreign Policy in Focus

“At a time when all caring people are seeking a new way forward out of a year of unimaginable death, destruction, and rampant inequality, along comes a book that gives us hope that a better world may be possible.”
—Toward Freedom

“A gripping read.”
—NACLA Report on the Americas

“The authors helped build the network of international allies that spearheaded the global fight against gold mining in El Salvador, a fight premised on the argument that the mines would wreck the country’s rivers.”
—Bill McKibben, The New Yorker

“It is rare, in the world of corporate power, to have a story where David beats Goliath. And rarer still to have one that reads like a fast-paced thriller.”
—Adam Hochschild, author of King Leopold’s Ghost and Rebel Cinderella

“Bravo to the courageous Salvadorans—and their likely and unlikely allies—who prove that victories against overwhelming odds are possible. . . . The water defenders of El Salvador and their international partners provide a powerful guidebook, poignantly retold by Broad and Cavanagh, of how the struggles for justice in the United States can link with allies abroad to build power and win.”
—Opal Tometi, cofounder of Black Lives Matter

“This story of how everyday citizens, against implacable odds, managed to defeat a corporation that ravaged their community and polluted their water is one of the most inspiring I have read in many years. A blueprint for further global action . . . it is also exceptionally moving, full of unforgettable characters, intrigue, and surprising twists and turns.”
—Ariel Dorfman, author of Death and the Maiden

“If you ever felt that your own contribution didn’t matter and that the powerful always win, this captivating saga will help you envision who truly has power if we unleash our imaginations and act together.”
—Ai-jen Poo, executive director of the National Domestic Workers Alliance

“Broad and Cavanagh are masterful storytellers. The words, deeds, and stories of people in El Salvador come alive so vividly in these pages to reinforce what we in the Poor People’s Campaign in the United States know well: the most powerful defenders of water, of the environment—of justice across the board—are poor people.”
—Rev. Dr. William Barber II, national co-chair of the Poor People’s Campaign author of The Third Reconstruction

“When the story of the courageous Salvadoran people came to my ears, I was full of pride and hope. Indigenous peoples everywhere are fighting for their water, and enlightened governments are valuing water over foreign corporate control. Our work . . . is a parallel struggle, and we are inspired by the people from the south. The Eagle and the Condor meet again.”
—Winona LaDuke, author of To Be a Water Protector

“In this gripping tale full of drama, plot twists, and, most importantly, the powerful and savvy dedication of ordinary people and their communities, Robin Broad and John Cavanagh have given us a terrific play-by-play handbook of how David can, in fact, beat Goliath.”
—Dana Frank, author of The Long Honduran Night

Robin Broad is an expert in international development and was awarded a prestigious Guggenheim fellowship for her work surrounding mining in El Salvador, as well as two previous MacArthur fellowships. A professor at American University, she served as an international economist in the US Treasury Department, in the US Congress, and at the Carnegie Endowment for International Peace. Broad and her husband, John Cavanagh, have been involved in the Salvadoran gold mining saga since 2009. They helped build the network of international allies that spearheaded the global fight against mining in El Salvador. They have co-authored several previous books together.

John Cavanagh is director of the Washington, DC-based Institute for Policy Studies, an organization that collaborates with the Poor People’s Campaign and other dynamic social movements to turn ideas into action for peace, justice, and the environment. Previously, he worked with the United Nations to research corporate power. Cavanagh and his wife, Robin Broad, have been involved in the Salvadoran gold mining saga since 2009. They helped build the network of international allies that spearheaded the global fight against mining in El Salvador. They have coauthored several previous books together.
Loading...
or support indie stores by buying on