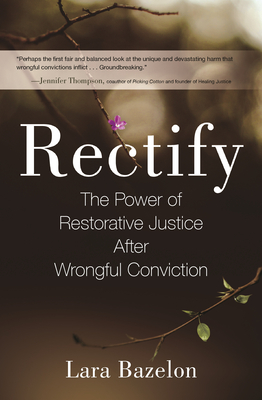 The Power of Restorative Justice After Wrongful Conviction

Makes a powerful argument for adopting a model of restorative justice as part of the Innocence Movement so exonerees, crime victims, and their communities can come together to heal.

In Rectify, a former Innocence Project director and journalist Lara Bazelon puts a face to the growing number of men and women exonerated from crimes that kept them behind bars for years—sometimes decades—and that devastate not only the exonerees but also their families, the crime victims who mistakenly identified them as perpetrators, the jurors who convicted them, and the prosecutors who realized too late that they helped convict an innocent person.

Bazelon focuses on Thomas Haynesworth, a teenager arrested for multiple rapes in Virginia, and Janet Burke, a rape victim who mistakenly IDed him. It took over two decades before he was exonerated. Conventional wisdom points to an exoneration as a happy ending to tragic tales of injustice, such as Haynesworth’s. However, even when the physical shackles are left behind, invisible ones can be profoundly more difficult to unlock.

In the midst of Bazelon’s frustration over the blatant limitations of courts and advocates, her hope is renewed by the fledgling but growing movement to apply the centuries-old practice of restorative justice to wrongful conviction cases. Using the stories of Thomas Haynesworth, Janet Burke, and other crime victims and exonerees, she demonstrates how the transformative experience of connecting isolated individuals around mutual trauma and a shared purpose of repairing harm unite unlikely allies. Movingly written and vigorously researched, Rectify takes to task the far-reaching failures of our criminal justice system and offers a window into a future where the power it yields can be used in pursuit of healing and unity rather than punishment and blame.

Praise For Rectify: The Power of Restorative Justice After Wrongful Conviction…

“Rectify takes perhaps the first fair and balanced look at the unique and devastating harm that wrongful convictions inflict. From the original victims and the innocent men and women to our families and wider communities, Lara Bazelon’s groundbreaking work demonstrates that by collectively showing up and bearing witness to each other’s trauma, we can unpack our grief, restore our voices, and become strong and powerful wounded healers.”
—Jennifer Thompson, coauthor of Picking Cotton: Our Memoir of Injustice and Redemption and founder of Healing Justice

“Lara Bazelon is a personal hero of mine. She fearlessly tackles treacherous legal issues with her brain and her pen, and the results are profound. In Rectify, she shines a light on the ‘second punishment’ that follows exoneration: the stigmas and obstacles that former prisoners and crime victims face even though they’ve already paid a terrible price. I highly recommend this book.”
—Jason Flom, CEO of Lava Records and host of Wrongful Conviction with Jason Flom

“Almost always, discussions of restorative justice consider only its role in mending the lives of victims, offenders, and the community when guilt is clear and accepted. But, to paraphrase a senior legislator this vital book quotes, in courts it is not only justice that we do; it is injustice too. Now Lara Bazelon focuses her remarkable ability to tell stories on that overlooked rip in the fabric: the cases in which the convict is innocent, in which the person in prison is not the offender at all. As she shows movingly and simply, the principles of restorative justice have an invaluable role in mending there too. Starting today, no examination of restorative justice will be adequate without considering what Lara Bazelon has added with Rectify.”
—Dean Strang, defense lawyer in State of Wisconsin v. Steven Avery and author of Worse Than the Devil

“The innocence movement transformed the way we think about the criminal justice system by exonerating thousands of wrongfully convicted men and women. Rectify asks what healing looks like, for them and for the crime victims whose lives have been upended. It is a story about restorative justice that is by turns tragic, inspiring, and triumphant.”
—Barry Scheck, cofounder and director of the Innocence Project

Lara Bazelon is a writer and associate professor at the University of San Francisco School of Law, where she is the director of the Criminal Juvenile Justice and Racial Justice Clinics. A 2016 MacDowell Fellow and a 2017 Mesa Refuge Langeloth Fellow, she is the former director of the Loyola Law School Project for the Innocent. Bazelon is also a nonresident fellow with Brandeis University’s Schuster Institute for Investigative Journalism. Her writing has appeared in the New York Times, Atlantic, Washington Post, Politico, and Slate, where she is a contributing writer and has a long-running series about wrongful conviction cases. This is her first book.
Loading...
or
Not Currently Available for Direct Purchase