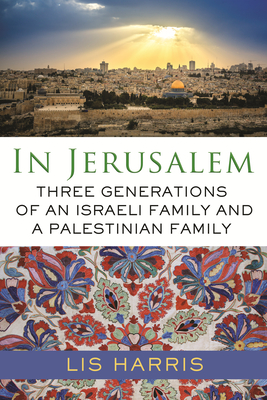 Three Generations of an Israeli Family and a Palestinian Family

An entirely fresh take on the Israeli-Palestinian conflict that examines the life-shaping reverberations of wars and ongoing tensions upon the everyday lives of families in Jerusalem.

An American, secular, diasporic Jew, Lis Harris grew up with the knowledge of the historical wrongs done to Jews. In adulthood, she developed a growing awareness of the wrongs they in turn had done to the Palestinian people. This gave her an intense desire to understand how the Israelis’ history led them to where they are now. However, she found that top-down political accounts and insider assessments made the people most affected seem like chess pieces. What she wanted was to register the effects of the country’s seemingly never-ending conflict on the lives of successive generations.

Shuttling back and forth over ten years between East and West Jerusalem, Harris learned about the lives of two families: the Israeli Pinczowers/Ezrahis and the Palestinian Abuleils. She came to know members of each family—young and old, religious and secular, male and female. As they shared their histories with her, she looked at how each family survived the losses and dislocations that defined their lives; how, in a region where war and its threat were part of the very air they breathed, they gave children hope for their future; and how the adults’ understanding of the conflict evolved over time. Combining a decade of historical research with political analysis, Harris creates a living portrait of one of the most complicated and controversial conflicts of our time.

Praise For In Jerusalem: Three Generations of an Israeli Family and a Palestinian Family…

“Fair, evenhanded stories of what life is really like in the riven state of Israel.”
—Kirkus Reviews

“[A] distinctive account that shows the ongoing effects of the conflict on generations. Readers interested in seeing beyond stereotypes and political posturing will appreciate.”
—Library Journal

“That Harris could immerse herself in this world and come away with a counter-narrative that overcomes the brutality, violence, and pain, and tells the story with great nuance and complexity, is a triumph of the power of stories and the perseverance of the storyteller.”
—The Revealer

“Lis Harris’s epic and epically beautiful real-life tale about two cultures, two religions, two families, trying to survive difference in a shared world is a monumental work carved out of rock, truth, and love. The deep and complex realities of Israeli/Palestinian daily life has had no better observer and no more judicious participant. A work for the ages.”
—Hilton Als, author of The Women

“Lis Harris has written about a conflict in which the members of each side, acutely damaged by trauma, are so angry at the other that they can’t listen. But Harris can. Wherever our sympathies lie, we have something to learn from this intensively reported and meticulously written account of two extended families who don’t so much represent the Israeli-Palestinian conflict as help us understand its toxic effects.”
—Anne Fadiman, author of The Wine Lover’s Daughter

“In immersing herself so deeply in the complex lives and stories of both Israelis and Palestinians, Lis Harris accomplishes something extraordinary here: a moving and heartfelt account on a very human scale of the intractable struggle of two peoples who share one land. Harris allows us to feel the terrible price young and old on both sides of this conflict continue to pay. And she does so with great empathy and insight, in beautifully chiseled prose.”
—James Shapiro, author of A Year in the Life of William Shakespeare

“The world should thank Lis Harris for this brave, skillful, and generous-spirited work of reporting. The details of the two families’ contrasting lives, so clearly and empathetically observed, make for a page-turning story. Somehow—maybe because of the author’s own faith in the transcendent humanity of her subjects—the reader comes away with a feeling of hope.”
—Ian Frazier, author of Great Plains

Lis Harris was a staff writer at The New Yorker from 1970 to 1995. She is a professor in the School of the Arts at Columbia University. In addition to innumerable articles, reviews and commentaries, she is the author of Holy Days: The World of a Hasidic Family, a New York Times Notable Book of the Year, Rules of Engagement: Four American Marriages, and Tilting at Mills: Green Dreams, Dirty Dealings and the Corporate Squeeze.
Loading...
or
Not Currently Available for Direct Purchase