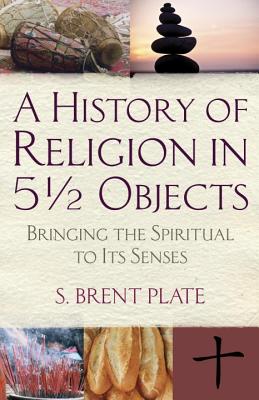 A History of Religion in 5½ Objects (Hardcover)

Bringing the Spiritual to Its Senses

A leading scholar explores the importance of physical objects and sensory experience in the practice of religion.

Humans are needy. We need things: objects, keepsakes, stuff, tokens, knickknacks, bits and pieces, junk, and treasure. We carry special objects in our pockets and purses, and place them on shelves in our homes and offices. As commonplace as these objects are, they can also be extraordinary, as they allow us to connect with the world beyond our skin.

A History of Religion in 5½ Objects takes a fresh and much-needed approach to the study of that contentious yet vital area of human culture: religion. Arguing that religion must be understood in the first instance as deriving from rudimentary human experiences, from lived, embodied practices, S. Brent Plate asks us to put aside, for the moment, questions of belief and abstract ideas. Instead, beginning with the desirous, incomplete human body (symbolically evoked by “½”), he asks us to focus on five ordinary types of objects—stones, incense, drums, crosses, and bread—with which we connect in our pursuit of religious meaning and fulfillment.

As Plate considers each of these objects, he explores how the world’s religious traditions have put each of them to different uses throughout the millennia. We learn why incense is used by Hindus at a celebration of the goddess Durga in Banaras, by Muslims at a wedding ceremony in West Africa, and by Roman Catholics at a Mass in upstate New York. Crosses are key not only to Christianity but to many Native American traditions; in the symbolic mythology of Peru’s Misminay community, cruciform imagery stands for the general outlay of the cosmos. And stones, in the form of cairns, grave markers, and monuments, are connected with places of memory across the world.

A History of Religion in 5½ Objects is a celebration of the materiality of religious life. Plate moves our understanding of religion away from the current obsessions with God, fundamentalism, and science—and toward the rich depths of this world, this body, these things. Religion, it turns out, has as much to do with our bodies as our beliefs. Maybe even more.

S. Brent Plate is visiting associate professor of religious studies at Hamilton College and co-founder and managing editor of Material Religion: The Journal of Objects, Art, and Belief. His writings have been published in the Washington Post, Huffington Post, Chronicle of Higher Education, and Religion Dispatches. His books include Religion and Film: Cinema and the Re-Creation of the World and Blasphemy: Art that Offends.

Praise For A History of Religion in 5½ Objects: Bringing the Spiritual to Its Senses…

“Plate’s provocative, contemplative, and beautifully written book aims to do just what its subtitle promises: to bring the spiritual and the religious ‘to its senses.’ Back to its senses, really. Religion, he makes powerfully clear, is first and foremost about things, and how our bodies relate to those things — that is, how we literally incorporate them into our beliefs and practices…. Plate’s very sensual, poetic style of writing encourages a kind of sensory mindfulness that, when you stop reading and look around, begins to change how you see things and your relationships with them.”
—Timothy Beal, Los Angeles Review of Books

“[Plate’s] book is an extended exercise in the materiality of faith. You might even call it a manifesto. Blurring the lines between inquiry and advocacy, it doesn’t just ask us to consider the multiple ways in which religion is a tactile phenomenon. It also calls on us to affirm and perhaps even to celebrate the sensory elements of faith….Plate’s interpretations, his reading of material culture, are often downright revelatory.”
—Jenna Weissman Joselit, The New Republic

“A timely, lively, lovely conversation partner for students, as well as for the rest of us.”
—ARTS

“The well-written and accessible text surprises and intrigues…this is an elegant and sensitive book. Highly recommended to general readers open to a different perspective on religious practice.”
—Library Journal, starred review

“Sometimes the title of a book is simply irresistible, and that’s true of A History of Religion in 5 1/2 Objects: Bringing the Spiritual to Its Senses.”
—The Jewish Journal

“[Plate] succeeds in helping us see that religion is best expressed not in transcendent experiences but in “sensual engagement with the physical objects of the world.” Hopefully, this poignant work will draw many to see and appreciate that objects have their own voice, worth, power, and magic.”
—Spirituality and Practice

“Brent Plate has unspooled a deeply compelling, remarkably capacious lyric mediation on the primacy of our human connection to the world. This global survey deftly braids a rich consideration of five ubiquitous objects of faith and art with small experiences from our modern daily lives in an effort to reawaken us to our essential physical being and to resanctify that which has come to appear mundane. Rather than framing religion as an escape from this world, Plate argues for a ‘soul craft’ grounded in the fundamental and ongoing need to rebind our ideas and our language to our bodies as we rebind our bodies to the body of world.”
—Kathleen J. Graber, author of The Eternal City: Poems

“Contemporary debates concerning belief tend to focus on conflicting ideas at the expense of the practical ways religious traditions are actually lived by billions around the world. A History of Religion in 5½ Objects bucks this trend by grounding its lofty and contentious subject in the sounds, smells, textures, and tastes through which faith has always been experienced. With wit and verve, S. Brent Plate’s groundbreaking history suggests that understanding religion begins not with our souls, but with our bodies.”
—Peter Manseau, author of Vows

“A deft, delightful incantation in praise of religion’s sensual grounding in the elemental things of earth, Plate’s work restores the link between the spiritual and material throughout the world’s religious traditions. Traversing the contemporary and the ancient, the local and the global, this book carries the reader home to the body, the senses, and the soul. Plate’s  elegant and insightful prose illuminates the creative human activities that make religion ordinary, ubiquitous, and powerfully important. A joy to read, one lingers in this book’s scent long after turning the last page.”
—Rebecca Ann Parker, co-author of Saving Paradise

“Brent Plate’s A History of Religion in 5½ Objects is a treasure. A book written by a scholar of religion that confuses as it clarifies, obscures as it illuminates, and challenges as it reassures; it takes an innovative approach to thinking about religion, feeling it in our lives, and highlighting its downright sensational aspects as a material, and spiritual, reality. A great joy to read.”
—Gary Laderman, author of Sacred Matters
or
Not Currently Available for Direct Purchase
Copyright © 2020 American Booksellers Association