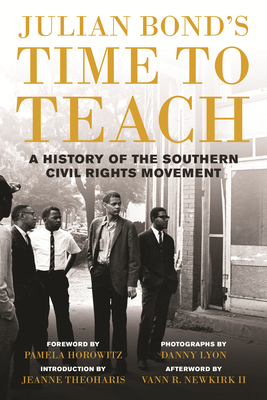 A History of the Southern Civil Rights Movement

A masterclass in the civil rights movement from one of the legendary activists who led it.

Compiled from his original lecture notes, Julian Bond’s Time to Teach brings his invaluable teachings to a new generation of readers and provides a necessary toolkit for today’s activists in the era of Black Lives Matter and #MeToo. Julian Bond sought to dismantle the perception of the civil rights movement as a peaceful and respectable protest that quickly garnered widespread support. Through his lectures, Bond detailed the ground-shaking disruption the movement caused, its immense unpopularity at the time, and the bravery of activists (some very young) who chose to disturb order to pursue justice.

Praise For Julian Bond's Time to Teach: A History of the Southern Civil Rights Movement…

“It’s easy to understand why these courses would have been popular. His lectures are accessible, comprehensive, and compelling, and Bond, who once hosted Saturday Night Live, and who appeared in a couple of commercial films, was a charismatic presence. This authoritative testimony is bound to become a staple of American civil rights literature.”
—Booklist, Starred Review

“[A] . . . revelatory collection of classroom lectures . . . The result is a worthy contribution to the historical record and an inspirational guide for today’s social justice activists.”
—Publishers Weekly

“This series of inspiring lectures, which Bond delivered in his popular college courses, is an indispensable master class that resonates with the current times. Within a broad synthesis of the freedom movement, Bond reflects stirringly on his own experiences, making this deep dive into civil rights history an engaging memoir as well as a guide for twenty-first-century crusades for equal rights. The dynamic narrative is made even more so by Danny Lyon’s photographs of the era.”
—The New York Times

“Every chapter radiates deep wisdom, fierce historical reality, and far-sighted philosophical insights. Bond brilliantly comes to grips with what freedom, social justice, and genuine racial equality are about in the American (and global) context.”
—Douglas Brinkley, the Katherine Tsanoff Brown Chair in Humanities and professor of history, Rice University

“Julian Bond lived this history with unflinching dignity and matchless grace. I miss him dearly. Our wounded country needs every lesson he teaches.”
—Taylor Branch, author of the trilogy America in the King Years

“Julian Bond, who was one of the greatest people I ever met, was a dedicated teacher, scholar, and civil rights leader. Julian Bond’s Time to Teach is a gift and should be required reading for every American. Bond’s words are a guiding light to the power we all possess.”
—Dave Matthews, Grammy Award–winning singer and songwriter

“The lessons in these lectures speak directly to the urgency of now, like an unsparing and prophetic admonishment to those who can or will not remember the past.”
—Diane McWhorter, author of the Pulitzer Prize–winning book Carry Me Home

“Julian Bond’s words continue to educate, inspire, and provoke. As we witness the emergence of new sensibilities regarding the complex ways racism has structured our institutions, Julian Bond’s Time to Teach reminds us of historical continuities, unfulfilled dreams, and collective hope for the future.”
—Angela Y. Davis, Distinguished Professor Emerita, History of Consciousness and Feminist Studies, University of California, Santa Cruz

“Forty years ago, I had the good fortune to hear Julian Bond speak. I was a third-year law student at Ole Miss, and there were plenty of skeptics in the crowd. They didn’t bother him; nothing did. He was cool, polished, smart, dramatic, and thoroughly prepared. I admitted to myself that I would never be able to speak like him. And I was correct.”
—John Grisham

Horace Julian Bond (1940-2015) was a leader in the civil rights movement, a politician, professor, writer, and activist. A founding member of the Student Nonviolent Coordinating Committee, he went on to serve as president of the Southern Poverty Law Center from 1971 to 1979. He served ten years in the Georgia House and six terms in the Georgia Senate. From 1998 to 2010, Bond was the board chairman of the NAACP. He taught at several universities, including the University of Virginia, where he spent twenty years as a professor in the history department. He is the author of A Time To Speak, A Time To Act.

Pamela Horowitz (Foreword) was one of the first lawyers hired at the Southern Poverty Law Center. She worked in partnership with her late husband, Julian Bond, in multiple public, private, and academic projects and is involved in several activities honoring his legacy.

Jeanne Theoharis (Introduction) is Distinguished Professor of Political Science at Brooklyn College of the City University of New York. She is the author of The Rebellious Life of Mrs. Rosa Parks (NAACP Image Award winner 2014) and A More Beautiful and Terrible History: The Uses and Misuses of Civil Rights History (Brooklyn Public Library Literary Prize for Nonfiction 2018). Jeanne was Julian Bond's student, teaching assistant, and mentee.

Vann R. Newkirk II (Afterword) is a staff writer at The Atlantic, where he covers politics and policy.