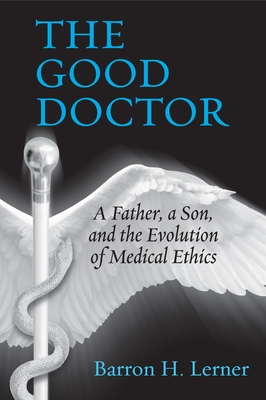 A Father, a Son, and the Evolution of Medical Ethics

The story of two doctors, a father and son, who practiced in very different times and the evolution of the ethics that profoundly influence health care

As a practicing physician and longtime member of his hospital’s ethics committee, Dr. Barron Lerner thought he had heard it all. But in the mid-1990s, his father, an infectious diseases physician, told him a stunning story: he had physically placed his body over an end-stage patient who had stopped breathing, preventing his colleagues from performing cardiopulmonary resuscitation, even though CPR was the ethically and legally accepted thing to do. Over the next few years, the senior Dr. Lerner tried to speed the deaths of his seriously ill mother and mother-in-law to spare them further suffering.

These stories angered and alarmed the younger Dr. Lerner—an internist, historian of medicine, and bioethicist—who had rejected physician-based paternalism in favor of informed consent and patient autonomy. The Good Doctor is a fascinating and moving account of how Dr. Lerner came to terms with two very different images of his father: a revered clinician, teacher, and researcher who always put his patients first, but also a physician willing to “play God,” opposing the very revolution in patients' rights that his son was studying and teaching to his own medical students.

But the elder Dr. Lerner’s journals, which he had kept for decades, showed the son how the father’s outdated paternalism had grown out of a fierce devotion to patient-centered medicine, which was rapidly disappearing. And they raised questions: Are paternalistic doctors just relics, or should their expertise be used to overrule patients and families that make ill-advised choices? Does the growing use of personalized medicine—in which specific interventions may be best for specific patients—change the calculus between autonomy and paternalism? And how can we best use technologies that were invented to save lives but now too often prolong death? In an era of high-technology medicine, spiraling costs, and health-care reform, these questions could not be more relevant.

As his father slowly died of Parkinson’s disease, Barron Lerner faced these questions both personally and professionally. He found himself being pulled into his dad’s medical care, even though he had criticized his father for making medical decisions for his relatives. Did playing God—at least in some situations—actually make sense? Did doctors sometimes “know best”?

A timely and compelling story of one family’s engagement with medicine over the last half century, The Good Doctor is an important book for those who treat illness—and those who struggle to overcome it.

Barron Lerner is the author of four previous books on medicine and a frequent contributor to the New York Times’ Well column, TheAtlantic.com, Huffington Post, and several blogs. He lives in Westchester County, New York, and is a bioethicist, historian of medicine, and internist at New York University’s Langone School of Medicine.

Praise For The Good Doctor: A Father, a Son, and the Evolution of Medical Ethics…

“Exquisitely insightful... The Good Doctor poses a fundamental riddle faced by every historian: How can we question the decisions and attitudes of our forebears without having experienced the contexts that shaped them? It makes for a particularly compelling discussion when the players are father and son, sharing as their lives’ work an ethically charged, ever-changing profession.”
—New York Times

“Barron Lerner’s marvelous book—a deeply intimate story about his father and the practice of medicine—touches on some of the most profound issues in medicine today: autonomy, medical wisdom, empathy, paternalism and the evolving roles of the doctor and patient.  This is one of the most thoughtful and provocative books that I have read in a long time, and I suspect that generations of doctors and patients will find it just as thought provoking.”
—Siddhartha Mukherjee, author of The Emperor of All Maladies

“The Good Doctor is a lovely book and a loving book; it's a book about medicine and family and ethics and history which embraces complexity and speaks to all those subjects with wide-ranging compassion and great good sense. And it's a father-son doctor saga with much to say about the healing power of story and understanding.”
—Perri Klass, MD, author of A Not Entirely Benign Procedure and The Mercy Rule

“An absolutely compelling treatise on bioethics told thru the lens of a physician's relationship with his physician father. If you want to understand the modern state of ethics in medicine, read this book.”
—Mehmet Oz, MD, Professor and Vice Chair, Surgery NY Presbyterian/Columbia

“A heartwarming story about a father-son doctor duo spanning a century, exquisitely showing the evolution of medical practice from antibiotics through bioethics. A small gem of a book.”
—Samuel Shem, MD, author of The House of God and The Spirit of the Place

“The younger Lerner is occasionally shocked by his father’s belief that his intimate knowledge of his patients and their diseases gave him insight and authority on what was best for them, including the proper time to stop treatment and allow a patient to die. Yet Lerner does more than criticize; he thoughtfully examines the case for both ways of practicing medicine, and in many ways the book is a tribute as much as a critique. Perhaps, Lerner argues, there is an appropriate middle ground behind the father’s art of care and the son’s.”
—Health Affairs