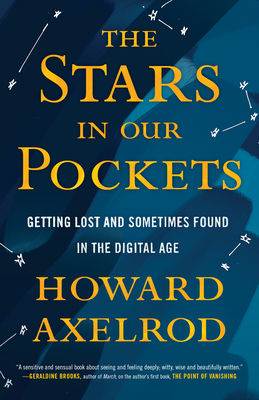 The Stars in Our Pockets

Getting Lost and Sometimes Found in the Digital Age

What shapes our sense of place, our sense of time, and our memory? How is technology changing the way we make sense of the world and of ourselves?

The human brain’s ability to adapt has been an evolutionary advantage for the last 40,000 years, but now, for the first time in human history, we’re effectively living in two environments at once—the natural and the digital—and many of the traits that help us online don’t help us offline, and vice versa. Drawing on his experience of acclimating to a life of solitude in the woods and then to digital life upon his return to the city, Howard Axelrod explores the human brain’s impressive but indiscriminate ability to adapt to its surroundings. The Stars in Our Pockets is a portrait of, as well as a meditation on, what Axelrod comes to think of as “inner climate change.” Just as we’re losing diversity of plant and animal species due to the environmental crisis, so too are we losing the diversity and range of our minds due to changes in our cognitive environment.

As we navigate the rapid shifts between the physical and digital realms, what traits are we trading without being aware of it? The Stars in Our Pockets is a personal and profound reminder of the world around us and the worlds within us—and how, as alienated as we may sometimes feel, they were made for each other.

Praise For The Stars in Our Pockets: Getting Lost and Sometimes Found in the Digital Age…

“Axelrod makes a compelling argument for drawing a new kind of map, one that helps us as we search and stumble between the borderlines of our digital and physical worlds . . . he meditates on the ways our screens are changing our relationship to time, space, and each other, while dipping into philosophy, astronomy, neuroscience, and poetry. Like his memoir, it’s an intimate book; he discusses big themes, big ideas, but the feel is as though you are leaning in close across a table in a dimly lit space.”
—The Boston Globe

"If we imagine, with wild configuration, Thoreau as one parenthesis, Axelrod could be the other, the two holding decades of social evolution between them. Thoreau appeared when America was still young, a seer who could caution how the newly invented telegraph could alter our natural sense of time and space; Axelrod shows us what that alteration now looks like. He makes clear what our new condition portends, and also makes clear, by his own example, that those former ways fronting the world are not yet completely lost. These are the stars in our pockets, the constellations that have guided our navigation for so long."
—Sven Birkerts, AGNI Magazine

“Poetic, ruminative, and never preachy, this book is a game changer for readers who yearn to see beyond 240 characters.”
—Booklist, Starred Review

“A provocative inquiry . . . Refreshingly, Axelrod doesn’t deliver a screed against cybertechnology but rather a series of philosophical meditations on the consequences of connecting ourselves digitally to the point where the realm of the screen is a world unto itself.”
—Kirkus Reviews, Starred Review

“Timely, essential, generous...Put down your phone and read this book. Maybe even get your friends to read it, too, and then have the kinds of conversations about it that can’t be had on social media.”
—Chicago Tribune

Praise for The Point of Vanishing

“What makes his book completely mesmerizing—besides his lovely prose, that is—is how exquisitely it balances between the poles of revelation and disintegration. At times, in the depths of winter, when Axelrod becomes preoccupied with observing the changing color of shadows on the snow, he seems on the verge of a transcendent understanding of how to exist entirely in the present.”
—Slate Book Review

“Mr. Axelrod is clearly a gifted writer . . . The best thing about Mr. Axelrod’s frequently absorbing book is how idiosyncratic it feels; he is a unique presence on the page.”
—New York Times Daily Review

Howard Axelrod is the author of The Point of Vanishing: A Memoir of Two Years in Solitude, named one of the best books of 2015 by Slate, the Chicago Tribune, and Entropy Magazine, and one of the best memoirs of 2015 by Library Journal. His essays have appeared in the New York Times Magazine, O Magazine, Politico, Salon, the Virginia Quarterly Review, the Boston Globe, and the Paris Review. He has taught at Harvard, the University of Arizona, and is currently the director of the Creative Writing Program at Loyola University in Chicago. Connect with him at howardaxelrod.com.
or support indie stores by buying on