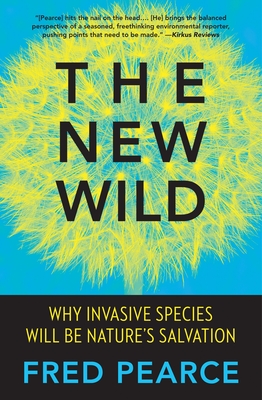 Why Invasive Species Will Be Nature's Salvation

Named one of the best books of 2015 by The Economist

For a long time, veteran environmental journalist Fred Pearce thought in stark terms about invasive species: they were the evil interlopers spoiling pristine “natural” ecosystems. Most conservationists and environmentalists share this view. But what if the traditional view of ecology is wrong—what if true environmentalists should be applauding the invaders?

In The New Wild, Pearce goes on a journey across six continents to rediscover what conservation in the twenty-first century should be about. Pearce explores ecosystems from remote Pacific islands to the United Kingdom, from San Francisco Bay to the Great Lakes, as he digs into questionable estimates of the cost of invader species and reveals the outdated intellectual sources of our ideas about the balance of nature. Pearce acknowledges that there are horror stories about alien species disrupting ecosystems, but most of the time, the tens of thousands of introduced species usually swiftly die out or settle down and become model eco-citizens. The case for keeping out alien species, he finds, looks increasingly flawed.

As Pearce argues, mainstream environmentalists are right that we need a rewilding of the earth, but they are wrong if they imagine that we can achieve that by reengineering ecosystems. Humans have changed the planet too much, and nature never goes backward. But a growing group of scientists is taking a fresh look at how species interact in the wild. According to these new ecologists, we should applaud the dynamism of alien species and the novel ecosystems they create.

In an era of climate change and widespread ecological damage, it is absolutely crucial that we find ways to help nature regenerate. Embracing the new ecology, Pearce shows us, is our best chance. To be an environmentalist in the twenty-first century means celebrating nature’s wildness and capacity for change.

Praise For The New Wild: Why Invasive Species Will Be Nature's Salvation…

“[Pearce] hits the nail on the head… [He] brings the balanced perspective of a seasoned, freethinking environmental reporter, pushing points that need to be made.”
—Kirkus Reviews

Praise for The New Wild

“Pearce shows that biodiversity actually increases more frequently than it decreases when newer wildlife marches in. Must reading for environmentalists of every stripe, and an optimistic report on the resilience of nature in a world of constantly shifting ecosystems.”
—Booklist

“I wholly agree with Fred Pearce’s argument for rewilding. Life, from the smallest bacterium to the whole living planet, is dynamic. Species do not belong in a planet-sized zoo. We should let Gaia evolve.”
—James Lovelock, author of The Vanishing Face of Gaia and A Rough Ride to the Future

“Terrific… [Pearce has] produced a work of required reading for anyone concerned about global justice in the twenty-first century.”
—Raj Patel, author of The Value of Nothing

When the Rivers Run Dry

Fred Pearce is an award-winning author and journalist based in London. He has reported on environmental, science, and development issues from eighty-five countries over the past twenty years. Environment consultant at New Scientist since 1992, he also writes regularly for the Guardian newspaper and Yale University’s prestigious e360 website. Pearce was voted UK Environment Journalist of the Year in 2001 and CGIAR agricultural research journalist of the year in 2002, and he won a lifetime achievement award from the Association of British Science Writers in 2011. His many books include With Speed and Violence, Confessions of an Eco-Sinner, The Coming Population Crash, and The Land Grabbers.
Loading...
or support indie stores by buying on