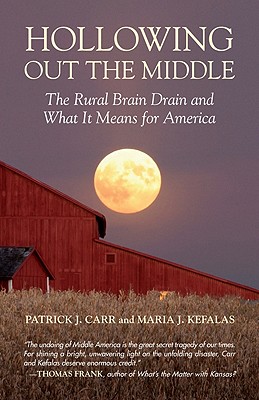 Hollowing Out the Middle

The Rural Brain Drain and What It Means for America

Watch the book trailer for "Hollowing Out the Middle" Startling research shows that small towns--from Maine to Missouri--are in jeopardy from exporting their most precious resource: young people A Midwest Connections Pick In 2001, the MacArthur Foundation dispatched sociologists Patrick J. Carr and Maria J. Kefalas to a small town in Iowa to chronicle the exodus of young people from America's countryside and to understand the process of the rural brain drain. One in five Americans, nearly sixty million people, live in small towns, and the rate at which young people are permanently leaving has grave local and national repercussions. Carr and Kefalas follow the trajectories of college-bound "Achievers"; working-class "Stayers," trapped in a region's dying agro-industrial economy; "Seekers," who join the military as a way out; and "Returners," who eventually circle back to their hometowns. Surprisingly, the authors find that adults in a community play a pivotal part in their town's decline by pushing away "the best and brightest" and underinvesting in those who choose to stay. The emptying out of small towns is a nationwide concern, but there are strategies for arresting the process and creating sustainable, thriving communities. "Hollowing Out the Middle" is a wake- up call we can't afford to ignore.