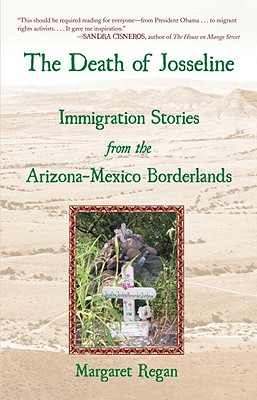 The Death of Josseline (Hardcover)

Immigration Stories from the Arizona-Mexico Borderlands

Dispatches from Arizona—the front line of a massive human migration—including the voices of migrants, Border Patrol, ranchers, activists, and others

For the last decade, Margaret Regan has reported on the escalating chaos along the Arizona-Mexico border, ground zero for immigration since 2000. Undocumented migrants cross into Arizona in overwhelming numbers, a state whose anti-immigrant laws are the most stringent in the nation. And Arizona has the highest number of migrant deaths. Fourteen-year-old Josseline, a young girl from El Salvador who was left to die alone on the migrant trail, was just one of thousands to perish in its deserts and mountains.

With a sweeping perspective and vivid on-the-ground reportage, Regan tells the stories of the people caught up in this international tragedy. Traveling back and forth across the border, she visits migrants stranded in Mexican shelters and rides shotgun with Border Patrol agents in Arizona, hiking with them for hours in the scorching desert; she camps out in the thorny wilderness with No More Deaths activists and meets with angry ranchers and vigilantes. Using Arizona as a microcosm, Regan explores a host of urgent issues: the border militarization that threatens the rights of U.S. citizens, the environmental damage wrought by the border wall, the desperation that compels migrants to come north, and the human tragedy of the unidentified dead in Arizona’s morgues.

Margaret Regan writes for the "Tucson Weekly" and has won a dozen journalism awards for border reporting, including two national prizes. She lives in Tucson. "From the Trade Paperback edition."

Praise For The Death of Josseline: Immigration Stories from the Arizona-Mexico Borderlands…

The Death of Josseline is a humane, sensitive, and informative perspective on a current and controversial topic. It also testifies to the fastest growing international criminal activity today: body trafficking. We all must pay attention.—Ana Castillo, author of The Guardians

"This book should be required reading for everyone—from President Obama and the director of Homeland Security to the Border Patrol agents, the vigilantes, and migrant rights activists. If people on both sides of the immigration issue picked up this book instead of arms, we would come to a peaceful resolution; it gave me inspiration."—Sandra Cisneros, author of The House on Mango Street

"In The Death of Josseline, Margaret Regan stands midpoint between immigration's push and pull . . . her clear and sympathetic eyes watching the south on its treacherous slog north."—Tom Miller, author of The Panama Hat Trail

"Most border 'experts' and immigration writers are mere tourists. This writer is not one of them. In Margaret Regan's The Death of Josseline, you have a writer who lives the story, reports from the heart of the killzone, and works the territory on a regular basis. The many admirers of Enrique's Journey will find much to admire, and fear, in this powerful report."—Luis Alberto Urrea, author of The Devil’s Highway

"There may be no better way to understand the muddle that is U.S. immigration policy than by reading these portraits of people who cross the border in hopes of a better life. . . . The Death of Josseline is an excellent way to understand-on a human level-the ebb and flow of human labor across political boundaries."—Ted Robbins, Southwest Correspondent, National Public Radio

"The Death of Josseline is a border reality check. It tells searing stories of those who've died crossing the Sonora/Arizona desert, of young people sent to prison in Tucson for the crime of working, and of the courageous people of conscience who stand up for the rights of migrants. Read it, and see why our deadly immigration policies need to be changed."—David Bacon, author of Illegal People