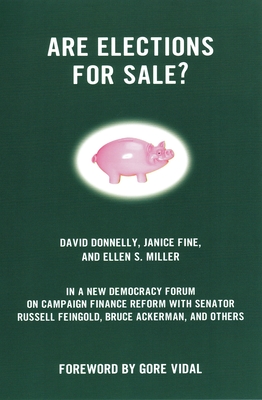 Now let us use our heads and deal appropriately, as they say in Washington, with a corporate ruling class that has hijacked the nation, and in so doing eliminate at least one glaring contradiction: that ours is a government of, by, and for the many when it is so notoriously the exclusive preserve of the few. --Gore Vidal, from the Foreword

In recent years, many voters have wondered whose voices are actually heard by our elected representatives. As the cost of running competitive political campaigns escalates and politicians appeal increasingly to wealthy interests to finance election bids, voters in many states have passed, or are primed to vote on, campaign finance initiatives.

In Are Elections for Sale?, David Donnelly, Janice Fine, and Ellen S. Miller argue that only full public funding of campaigns can ensure democratic elections, and they review the successes some states have had with the Clean Elections Act.

The New Democracy Forum is a series of short paperback originals exploring creative solutions to our most urgent national concerns.

Praise For Are Elections for Sale? (New Democracy Forum #11)…

American politics has become an arms race, with money doing the work of missiles. One side escalates and the other follows suit. As the spiral grows it is undermining the soul of democracy. But here's the good news: The majority of Americans want a new system of campaign finance. Every time voters have had a chance to choose a different way, they have spoken loud and clear. This book is the blueprint to return democracy to politics. --Bill Moyers