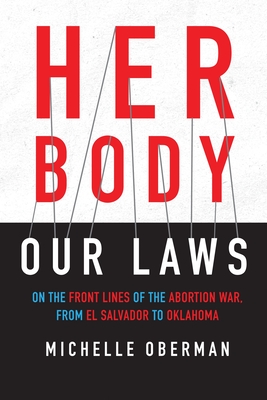 Her Body, Our Laws (Hardcover)

On the Front Lines of the Abortion War, from El Salvador to Oklahoma

With stories from the front lines, a legal scholar journeys through distinct legal climates to understand precisely why and how the war over abortion is being fought.

Drawing on her years of research in El Salvador—one of the few countries to ban abortion without exception—legal scholar Michelle Oberman explores what happens when abortion is a crime. Oberman reveals the practical challenges raised by a thriving black market in abortion drugs, as well as the legal challenges to law enforcement. She describes a system in which doctors and lawyers collaborate in order to identify and prosecute those suspected of abortion-related crimes, and the troubling results of such collaboration: mistaken diagnoses, selective enforcement, and wrongful convictions.

Equipped with this understanding, Oberman turns her attention to the United States, where the battle over abortion is fought almost exclusively in legislatures and courtrooms. Beginning in Oklahoma, one of the most pro-life states, and through interviews with current and former legislators and activists, she shows how Americans voice their moral opposition to abortion by supporting laws that would restrict it. In this America, the law is more a symbol than a plan.

Oberman challenges this vision of the law by considering the practical impact of legislation and policies governing both motherhood and abortion. Using stories gathered from crisis pregnancy centers and abortion clinics, she unmasks the ways in which the law already shapes women’s responses to unplanned pregnancy, generating incentives or penalties, nudging pregnant women in one direction or another.

In an era in which every election cycle features a pitched battle over abortion’s legality, Oberman uses her research to expose the limited ways in which making abortion a crime matters. Her insight into the practical consequences that will ensue if states are permitted to criminalize abortion calls attention to the naïve and misguided nature of contemporary struggles over abortion’s legality.

A fresh look at the battle over abortion law, Her Body, Our Laws is an invitation to those on all sides of the issue to move beyond the incomplete discourse about legality by understanding how the law actually matters.

Michelle Oberman is the Katharine and George Alexander Professor of Law at Santa Clara University School of Law and an internationally recognized scholar on the legal and ethical issues surrounding adolescence, pregnancy, and motherhood. She works at the intersection of public health and criminal law, focusing on domestic and international issues affecting women’s reproductive health. Her book When Mothers Kill (2008) won the Outstanding Book Award from the Academy of Criminal Justice Sciences.

Praise For Her Body, Our Laws: On the Front Lines of the Abortion War, from El Salvador to Oklahoma…

“A brief but sensible entry in the abortion wars.”
—Kirkus Reviews

“For anyone interested in a fresh, balanced perspective on abortion law and women’s rights.”
—Library Journal, Starred Review

“Drawing on her fascinating journeys into the abortion-hostile territories of El Salvador and Oklahoma, Oberman gives a penetrating analysis of both the power and limitations of laws governing abortion. This beautifully written and thought-provoking book offers the reader a novel way to consider the endless abortion conflict in the United States and elsewhere.”
—Carole Joffe, author of Dispatches from the Abortion Wars: The Costs of Fanaticism to Doctors, Patients, and the Rest of Us

“Oberman shows us that that in the midst of war, there is always space for listening. In her global journey through abortion laws and ideology, she brings us back to what really matters: sharing stories that help us recognize our common humanity. In our time of increasing polarization and politicization, Her Body, Our Laws demands a new path forward on abortion, one rooted in the difficult conversations we need to help us connect across our differences.”
—Aspen Baker, author of Pro-Voice: How to Keep Listening When the World Wants a Fight and founder of Exhale

“This is a splendid and important book. Oberman brings a legal scholar’s attention to analysis of the abortion wars, along with a powerful gift for telling the stories of those intimately involved. In so doing, she illuminates not only what is at stake in our debates about abortion law but also what is missing from them.”
—Debra Satz, the Marta Sutton Weeks Professor of Philosophy, Stanford University

“Oberman lays bare the messy and paradoxical realities of abortion that churn beneath the reductive debate over its legality. Stories gathered across borders and decades depict lofty ideals of morality and choice trampled by concrete oppressive conditions far more compelling than the letter of the law. As she astutely observes, abortion’s legal status matters little to those robbed by structural inequalities of dignity and volition in their reproductive experiences.”
—Jill E. Adams, founding executive director, Center on Reproductive Rights and Justice, University of California–Berkeley School of Law
or
Buy Here
Copyright © 2020 American Booksellers Association