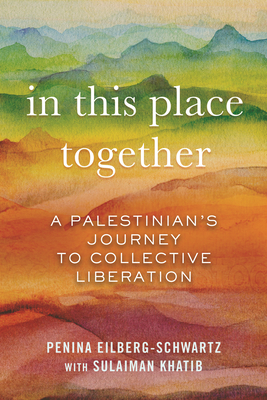 In This Place Together

A Palestinian's Journey to Collective Liberation

A narrative meditation on joint nonviolence, opening a window to the questions of power, multiple narratives, and imagination that touch on struggles for justice everywhere.

As a Palestinian youth, Sulaiman Khatib encountered the occupation in his village and attempted to fight back, stabbing an Israeli. Imprisoned at the age of 14, he began a process of political and spiritual transformation still unfolding today. In a book he asked Penina Eilberg-Schwartz, an American Jew, to write, and based on years of conversation between them, Khatib shares how his activism became deeply rooted in the belief that we must ground all work—from dialogue to direct action to healing—in recognition of the history and humanity of the other. He reveals how he became convinced that Palestinian freedom can flourish alongside Jewish connection to the land where he was born.

In language that is poetic and unflinchingly honest, Eilberg-Schwartz and Khatib chronicle what led him to dedicate his life to joint nonviolence. In his journey, he encountered the deep injustice of torture, witnessed the power of hunger strikes, and studied Jewish history. Ultimately, he came to realize mutual recognition, alongside a transformation of the systems that governed their lives, was necessary for both Palestinians and Israelis to move forward. Still, as he built friendships with Israelis and resisted the occupation alongside them, he could not lose sight of the great power imbalance in the relationship, of all the violence and erasure still present as they dreamt forward together.

Intimate and political, In This Place Together opens us up to the dangers and hopes of working with others across vast differences in power and experience. And it opens a new space, shapes a third narrative, and finds another world that can exist—though it’s often hard to see—inside this one.

Praise For In This Place Together: A Palestinian's Journey to Collective Liberation…

“A poignant, beautifully told story of a young man wanting to help create a bridge between Palestinians and Israelis. Best suited for those interested in Jewish and Middle East studies and contemporary social history.”
—Library Journal

“The next time someone asks you if there’s still hope for justice and peace in Israel and Palestine, just hand them this book.”
—Peter Beinart, author of The Crisis of Zionism

“This bold story of an all-too-ordinary Palestinian boy, prematurely made into a man, narrated by a white American Jewish woman, tells the Palestinian story while opening a myriad of taboo topics, without closing any. No matter the angle from which you enter this book, you will exit it slightly upended. For that alone, I invite you into the constructive uneasiness that many more will need to feel before any change on the ground bears fruit that we can all taste equally.”
—Sam Bahour, activist and co-editor of Homeland: Oral Histories of Palestine and Palestinians

“In the context of the Israeli-Palestinian conflict, its long-festering hatreds and its prospects for peaceful resolution, the phrase ‘the personal is political’ has never been more meaningfully embodied or illuminated than it is in Souli Khatib’s remarkable story. This moving, surprising, politically astute book, written with sensitivity and grace by Penina Eilberg-Schwartz, should be read by Middle East policy makers, scholars, diplomats, news junkies, and anyone who loved Colum McCann’s Apeirogon.”
—Letty Cottin Pogrebin, author, founding editor of Ms., and past chair of Americans for Peace Now

“As a Palestinian activist, I am proud to support In This Place Together. Khatib’s story of gradually opening to the power and necessity of joint nonviolence is one that all those who care about the future of Israel-Palestine should read.”
—Mubarak Awad, founder of the Palestinian Center for the Study of Nonviolence and Nonviolence International

“This is a story of the truest kind of courage and a much-needed type of leadership.”
—Mira Awad, Palestinian musician and artivista

“In This Place Together brought tears to my eyes more than once and inspired me more deeply than I have words to say. Souli Khatib’s path was forged in impossible terrain, and yet his is a story of hope, a light coming in through the crack in the door. This is a must-read, the kind of story our aching human race needs most. It will stay with me for many years to come.”
—Noa (Achinoam Nini), Israeli singer, songwriter, and activist

“In This Place Together is a must-read book for anyone who wants to understand the Palestinians’ cause, the peace movement within Palestine, and joint resistance of Israelis and Palestinians. It is beautifully written and evokes many emotions. But most importantly, it gives hope.”
—Aziz Abu Sarah, author of Crossing Boundaries: A Traveler’s Guide to World Peace and cofounder of MEJDI Tours

Penina Eilberg-Schwartz writes and lives in the Bay Area and has worked on issues of justice in Israel-Palestine with several organizations. She is a member of IfNotNow, a movement working to transform the American Jewish community’s support for the occupation into a call for freedom and dignity for Palestinians, Israelis, and all people.

Sulaiman Khatib was born in Hizma/Jerusalem and lives in Ramallah. He is an active member of various programs aiming to promote a peaceful solution to the Palestinian-Israeli conflict. He is cofounder of Combatants for Peace, a nonprofit Israeli/Palestinian peace-building organization.
Loading...
or support indie stores by buying on