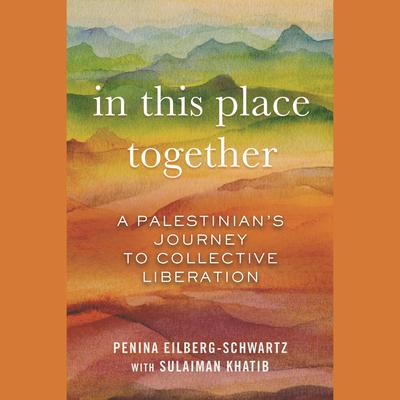 In This Place Together (Digital Audiobook)

A Palestinian's Journey to Collective Liberation

A narrative meditation on joint nonviolence, opening a window to the questions of power, multiple narratives, and imagination that touch on struggles for justice everywhere.

As a Palestinian youth, Sulaiman Khatib encountered the occupation in his village and attempted to fight back, stabbing an Israeli. Imprisoned at the age of 14, he began a process of political and spiritual transformation still unfolding today. In a book he asked Penina Eilberg-Schwartz, an American Jew, to write, and based on years of conversation between them, Khatib shares how his activism became deeply rooted in the belief that we must ground all work—from dialogue to direct action to healing—in recognition of the history and humanity of the other. He reveals how he became convinced that Palestinian freedom can flourish alongside Jewish connection to the land where he was born.

In language that is poetic and unflinchingly honest, Eilberg-Schwartz and Khatib chronicle what led him to dedicate his life to joint nonviolence. In his journey, he encountered the deep injustice of torture, witnessed the power of hunger strikes, and studied Jewish history. Ultimately, he came to realize mutual recognition, alongside a transformation of the systems that governed their lives, was necessary for both Palestinians and Israelis to move forward. Still, as he built friendships with Israelis and resisted the occupation alongside them, he could not lose sight of the great power imbalance in the relationship, of all the violence and erasure still present as they dreamt forward together.

Intimate and political, In This Place Together opens us up to the dangers and hopes of working with others across vast differences in power and experience. And it opens a new space, shapes a third narrative, and finds another world that can exist—though it’s often hard to see—inside this one.
Loading...