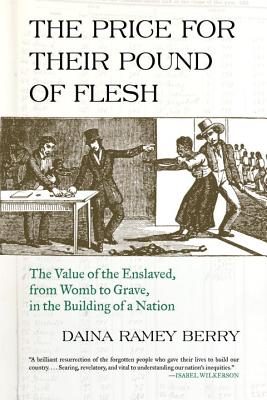 The Price for Their Pound of Flesh

The Value of the Enslaved, from Womb to Grave, in the Building of a Nation

Groundbreaking look at slaves as commodities through every phase of life, from birth to death and beyond, in early America

In life and in death, slaves were commodities, their monetary value assigned based on their age, gender, health, and the demands of the market. The Price for Their Pound of Flesh is the first book to explore the economic value of enslaved people through every phase of their lives—including preconception, infancy, childhood, adolescence, adulthood, the senior years, and death—in the early American domestic slave trade. Covering the full “life cycle,” historian Daina Ramey Berry shows the lengths to which enslavers would go to maximize profits and protect their investments. Illuminating “ghost values” or the prices placed on dead enslaved people, Berry explores the little-known domestic cadaver trade and traces the illicit sales of dead bodies to medical schools.

This book is the culmination of more than ten years of Berry’s exhaustive research on enslaved values, drawing on data unearthed from sources such as slave-trading records, insurance policies, cemetery records, and life insurance policies. Writing with sensitivity and depth, she resurrects the voices of the enslaved and provides a rare window into enslaved peoples’ experiences and thoughts, revealing how enslaved people recalled and responded to being appraised, bartered, and sold throughout the course of their lives. Reaching out from these pages, they compel the reader to bear witness to their stories, to see them as human beings, not merely commodities.

A profoundly humane look at an inhumane institution, The Price for Their Pound of Flesh will have a major impact how we think about slavery, reparations, capitalism, nineteenth-century medical education, and the value of life and death.

Winner of the 2018 Hamilton Book Award – from the University Coop (Austin, TX)

Winner of the 2018 Phillis Wheatley Literary Award, from the Sons and Daughters of the US Middle Passage

Finalist for the 2018 Frederick Douglass Book Prize from Yale University’s Gilder Lehrman Center for the Study of Slavery, Resistance, and Abolition

Praise For The Price for Their Pound of Flesh: The Value of the Enslaved, from Womb to Grave, in the Building of a Nation…

“In this sharp, affecting study, Berry reminds us of the cold calculus at the intersection of slavery and capitalism...A well-researched, effectively presented piece of scholarship that forthrightly confronts slavery’s brute essence.”
—Kirkus Reviews

“...highly readable and addressing the most heartbreaking and starkly gruesome aspects of slavery.”
—Library Journal

“With The Price for Their Pound of Flesh, Berry is now seen as a breakthrough writer who completed the herculean task of filling in the blanks of one of the darkest episodes in American history.”
—Essence Magazine

“Brings to light the gruesome history of the desecration and dissection of black bodies after death, especially by professors of anatomy in American colleges and medical schools.”
—Adam Rothman (professor of history at Georgetown University), American Historical Review

“A brilliant resurrection of the forgotten people who gave their lives to build our country. Rigorously researched and powerfully told, this book tallies the human price paid for the nation we now live in and restores these unrecognized Americans—their hopes, loves, and disregarded dreams—to their rightful place in history. Searing, revelatory, and vital to understanding our nation’s inequities.”
—Isabel Wilkerson, author of The Warmth of Other Suns: The Epic Story of America’s Great Migration

“Daina Ramey Berry’s harrowing account of how slaveholders turned every aspect of a slave’s life into a commodity to be sold on markets—from the reproductive possibilities of enslaved women to the corpses of deceased slaves—is a must-read for anyone interested in understanding American history, or our contemporary dilemmas. Reading The Price for Their Pound of Flesh will leave you with an overwhelming sense of sadness, but also with great anger that we are still failing to fully overcome this history’s legacy.”
—Sven Beckert, author of Empire of Cotton: A Global History

“Daina Berry has written the richest account of the many ways in which an enslaved African American’s body was bought and sold throughout her or his lifetime. From the cradle to the grave and beyond, enslavers priced black bodies based on their imagined fitness for labor, sexual exploitation, use as collateral, and even their value after death as dissection cadavers. In horrific detail, Berry shows that there was a price tag placed on every pound of flesh. She also shows the efforts of enslaved people to assert that their lives had values beyond the money that could be rendered from their muscles and extracted from their bones. Out of the certainty that their souls were pearls beyond price, black people fought to make room for their own system of human values.”
—Edward E. Baptist, author of The Half Has Never Been Told: Slavery and the Making of American Capitalism

Daina Ramey Berry is an associate professor of history and African and African diaspora studies, and the Oliver H. Radkey Regents Fellow in History, at the University of Texas at Austin. An award-winning historian, she is also a Distinguished Lecturer for the Organization of American Historians. She lives in Austin, Texas.
Loading...
or
Not Currently Available for Direct Purchase