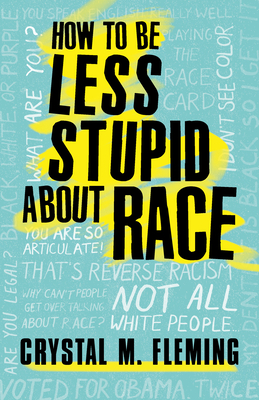 How to Be Less Stupid About Race

On Racism, White Supremacy, and the Racial Divide

How to Be Less Stupid About Race is your essential guide to breaking through the half-truths and ridiculous misconceptions that have thoroughly corrupted the way race is represented in the classroom, pop culture, media, and politics. Centuries after our nation was founded on genocide, settler colonialism, and slavery, many Americans are kinda-sorta-maybe waking up to the reality that our racial politics are (still) garbage. But in the midst of this reckoning, widespread denial and misunderstandings about race persist, even as white supremacy and racial injustice are more visible than ever before.

Combining no-holds-barred social critique, humorous personal anecdotes, and analysis of the latest interdisciplinary scholarship on systemic racism, sociologist Crystal M. Fleming provides a fresh, accessible, and irreverent take on everything that’s wrong with our “national conversation about race.” Drawing upon critical race theory, as well as her own experiences as a queer black millennial college professor and researcher, Fleming unveils how systemic racism exposes us all to racial ignorance—and provides a road map for transforming our knowledge into concrete social change.

Searing, sobering, and urgently needed, How to Be Less Stupid About Race is a truth bomb for your racist relative, friend, or boss, and a call to action for everyone who wants to challenge white supremacy and intersectional oppression. If you like Issa Rae, Justin Simien, Angela Davis, and Morgan Jerkins, then this deeply relevant, bold, and incisive book is for you.

Praise For How to Be Less Stupid About Race: On Racism, White Supremacy, and the Racial Divide…

“Fleming offers a crash course in what will be a radically new perspective for most and a provocative challenge that should inspire those who disagree with her to at least consider their basic preconceptions . . . . A deft, angry analysis for angry times.”
—Kirkus Reviews, Starred Review

“[A]n insightful and irreverent text . . . her work is truly accessible; she breaks down complex concepts and constructs arguments effectively in jocular, witty prose. This analysis of today’s complex sociopolitical climate would be a great starting point for anyone looking to question preconceived mainstream notions about race.”
—Publishers Weekly

“Fleming’s strength is her expertise as a sociologist . . . she wields her data like a sword, shredding racist nonsense.”
—The Christian Century

“Dr. Fleming offers a straight-no-chaser critique of our collective complicit ignorance regarding the state of race in the United States . . . . This book will leave you thinking, offended, and transformed.”
—Nina Turner, former Ohio state senator

“With its deft mix of satire, memoir, and empirical evidence, Fleming’s book is a groundbreaking model of public scholarship and sure to be an instant classic.”
—Eduardo Bonilla-Silva, President of the American Sociological Association and author of Racism without Racists: Colorblind Racism and the Persistence of Racial Inequality in America

“How to Be Less Stupid About Race is the perfect combination of Racism 101, critical race theory, and powerful analysis, woven with Dr. Crystal Fleming’s personal journey from racial naiveté to one of the most incisive critics of white supremacy.”
—Tanya Golash-Boza, author of Race and Racisms: A Critical Approach

“A bold, carefully researched, and intimate take on the race conversation that points the finger at all of us: yes, even those of us who know what intersectional means . . . . For those looking for a distinctly smart, humorous, and intellectually challenging read on a much-needed complex racial conversation, How to Be Less Stupid About Race is essential reading.”
—Angela Nissel, author of The Broke Diaries and Mixed

“An explosive book revealing the roots and nature of racism in our psyche, our interactions with each other, our institutions, our politics, our media, our gender relations, and even our love lives.”
—Aldon Morris, author of The Scholar Denied: W. E. B. Du Bois and the Birth of American Sociology

“Fleming upbraids us all (herself included) for our ignorance about race, but her breathtaking (and wig-snatching) lessons assure that racial illiteracy has a cure . . . . Don’t be stupid about race. Buy this book.”
—Vilna Bashi Treitler, author of The Ethnic Project: Transforming Racial Fiction into Ethnic Factions

“How to Be Less Stupid About Race takes no prisoners. Whether right, left, or center, all who are complicit with white racism face a withering confrontation. For me, the spiritual heart of the book lies in the consecutive analyses of the Obama and Trump presidencies. Fleming demonstrates that deep disdain for the latter need not mean nostalgia for the former.”
—William Darity Jr., Duke University

Crystal M. Fleming, PhD, is a writer and sociologist who researches racism in the United States and abroad. She earned degrees from Wellesley College and Harvard University and is associate professor of sociology and Africana studies at Stony Brook University. Fleming writes about race, sexuality, and politics for publications including The Root, Black Agenda Report, Vox, and Everyday Feminism, and she has tens of thousands of followers on social media. She is the author of Resurrecting Slavery: Racial Legacies and White Supremacy in France.
Loading...
or support indie stores by buying on