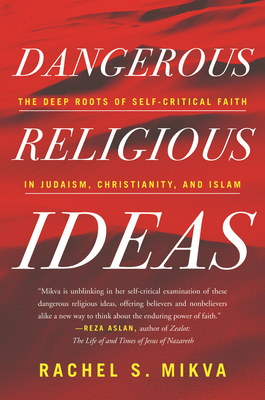 The Deep Roots of Self-Critical Faith in Judaism, Christianity, and Islam

Reveals how faith traditions have always passed down tools for self-examination and debate, because all religious ideas—not just extremist ones—can cause harm, even as they also embody important moral teachings.

Scripture’s abiding relevance can inspire great goodness, such as welcoming the stranger and extending compassion for the poor. But its authority has also been wielded to defend slavery, marginalize LGBTQ individuals, ignore science, and justify violence. Grounded in close readings of scripture and tradition in Christianity, Islam, and Judaism, religious scholar Rachel Mikva shows us that the Abrahamic religions have always been aware of their tremendous power both to harm and to heal. And so they have transmitted their sacred stories along with built-in tools—interpretive traditions—to do the necessary work of taking on dangerous religious ideas and fostering self-critical faith.

By exploring the themes of Scripture, Election, Reward and Punishment, Mikva examines how the interpretive methodologies of these religions have identified and grappled with their perilous power and positive potential. Many readers presume that their understanding of scripture’s meaning is absolute, forgetting how these sacred texts and the history of interpretation have valued multiple perspectives and recognized ongoing rhythms of change. It’s not a modern phenomenon to debate the nature of truth, hold space open for doubt, value humility, and question our capacity to know things—especially about God and God’s will—with certainty. In fact, none of the traditions could remain vital or thrive together without a sustained practice of self-critique. Dangerous Religious Ideas reframes the way we talk about faith to create a space where public discussion of religion is more constructive, nuanced, and socially engaged.

Praise For Dangerous Religious Ideas: The Deep Roots of Self-Critical Faith in Judaism, Christianity, and Islam…

“A generous and thought-provoking book about the power and uses of religious faith.”
—Booklist

“The book’s most radical gesture is its enactment of the change it wants to see in the world. In binding often antagonistic faiths between the covers of a single volume, Mikva shows how pleas from spiritual leaders for restraint, flexibility and self-critique unite the traditions of all three—and, in her view, offer the greatest hope for goodness, healing and justice.”
—The New York Times

“Presents a hopeful vision for the possibility of diverse religious practitioners respectfully engaging the deep wisdom of each other’s traditions.”
—Reading Religion

“Religion has been responsible for profound acts of compassion and unspeakable acts of violence. It has birthed great civilizations and destroyed entire societies. It has fostered the expansion of universal human rights and fomented hatred and bigotry of the other. In Rachel Mikva’s telling, the very things that make religion a force for good are also what makes it so dangerous. As both a scholar and a rabbi, Mikva is unblinking in her self-critical examination of these dangerous religious ideas, offering believers and nonbelievers alike a new way to think about the enduring the power of faith.”
—Reza Aslan, author of Zealot: The Life of and Times of Jesus of Nazareth

“Theologically informed, politically aware, and ultimately encouraging, the volume honestly names problematic texts and tendencies within the three monotheistic traditions and then provides the resources within those same traditions for self-correction and interreligious engagement. Given the role of religion in the public square, Mikva’s voice is not only helpful; it is also needed.”
—Amy-Jill Levine, author of The Misunderstood Jew

“A crucial contribution to the current struggle over the political uses and abuses of religion, Rachel Mikva’s nuanced and compelling case for self-critical faith examines the paradox of religious ideas that both inspire humility and human flourishing and mandate certainty and oppression. She invites those betrayed by faith and those nourished by faith to engage ultimate questions of meaning and morality as we consider public theologies that lead to a more just society for us all.”
—Rita Nakashima Brock, coauthor of Saving Paradise: How Christianity Traded Love of This World for Crucifixion and Empire

“This illuminating book will change the way you think about religious ideas.”
—Eboo Patel, founder and president of the Interfaith Youth Core and author of Interfaith Leadership: A Primer

“Dangerous Religious Ideas is engaging, vulnerable, honest, and powerful. If you are not bothered by this book in some way, you have probably not taken it seriously. Mikva’s work is provocative, and you will be a better person—whether of faith or not—for having read it.”
—Joel N. Lohr, coauthor of The Hebrew Bible for Beginners

Rachel S. Mikva serves as the Rabbi Herman E. Schaalman Chair in Jewish Studies and the Senior Faculty Fellow of the InterReligious Institute at Chicago Theological Seminary. Rabbi Mikva went to teach and earn her PhD at Jewish Theological Seminary, focusing on rabbinic literature and the history of biblical interpretation. Her courses and research address a range of Jewish and comparative studies, with a special interest in the intersections of scripture, culture, and ethics.
Loading...
or
Not Currently Available for Direct Purchase