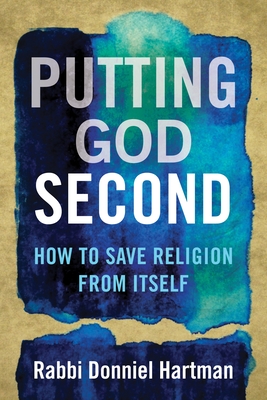 How to Save Religion from Itself

Why have the monotheistic religions failed to produce societies that live up to their ethical ideals? A prominent rabbi answers this question by looking at his own faith and offering a way for religion to heal itself.

In Putting God Second, Rabbi Donniel Hartman tackles one of modern life’s most urgent and vexing questions: Why are the great monotheistic faiths—Judaism, Christianity, and Islam—chronically unable to fulfill their own self-professed goal of creating individuals infused with moral sensitivity and societies governed by the highest ethical standards?

To answer this question, Hartman takes a sober look at the moral peaks and valleys of his own tradition, Judaism, and diagnoses it with clarity, creativity, and erudition. He rejects both the sweeping denouncements of those who view religion as an inherent impediment to moral progress and the apologetics of fundamentalists who proclaim religion’s moral perfection against all evidence to the contrary.

Hartman identifies the primary source of religion’s moral failure in what he terms its “autoimmune disease,” or the way religions so often undermine their own deepest values. While God obligates the good and calls us into its service, Hartman argues, God simultaneously and inadvertently makes us morally blind. The nature of this self-defeating condition is that the human religious desire to live in relationship with God often distracts religious believers from their traditions’ core moral truths.

The answer Hartman offers is this: put God second. In order to fulfill religion’s true vision for humanity—an uncompromising focus on the ethical treatment of others—religious believers must hold their traditions accountable to the highest independent moral standards. Decency toward one’s neighbor must always take precedence over acts of religious devotion, and ethical piety must trump ritual piety. For as long as devotion to God comes first, responsibility to other people will trail far, far behind.

In this book, Judaism serves as a template for how the challenge might be addressed by those of other faiths, whose sacred scriptures similarly evoke both the sublime heights of human aspiration and the depths of narcissistic moral blindness. In Putting God Second, Rabbi Hartman offers a lucid analysis of religion’s flaws, as well as a compelling resource, and vision, for its repair.

Praise For Putting God Second: How to Save Religion from Itself…

“A stimulating and sure-to-be discussed critique of monotheism.”
—Kirkus Reviews

“In this accessible exploration of how faith in God can determine and influence personality, Hartman (The Boundaries of Judaism) successfully engages with what he believes to be the most fundamental question of our time. He notes that the causes of the world’s great conflicts have begun to shift from ‘national and secular’ politics to religious ones. Given this, Hartman wonders whether religion actually makes believers treat others with more compassion and kindness. Despite his own deep commitment to Judaism, the rabbi does not flinch from exposing many examples, including some from the Bible, that argue against the idea of religion as a force for good. Using his own religion as his lens, Hartman analyzes the phenomena he labels God Intoxication and God Manipulation; in the former, obsession with paying attention to the divine leaves ‘less room...to be aware of the human condition,’ and in the latter, ‘God is drafted in the service of human self-interest’ to advance an individual’s personal interests and agendas. Hartman makes a powerful case that believers should both judge the word of God and ‘be inspired and instructed’ by it, and that putting people first is the real way to follow the divine will.”
—Publishers Weekly

“Eminently readable, constructively controversial and profoundly spiritual...This book is not for the spiritually faint-hearted.”
—The Jerusalem Post

“This is an intellectually lively work that illuminates and advances the conversation on religious faith. Putting God Second paints a portrait for religion in the modern world and makes the case for a view of religion in which love of persons and an affirmation of their dignity, integrity, and worth stand at the center of religious faith. In doing so, Hartman rescues religion from both its most reactionary exponents and its ‘cultural detractors’ who would bind religion into fundamentalist straitjackets.”
—Rabbi David Ellenson, director of the Schusterman Center for Israel Studies at Brandeis University and author of Jewish Meaning in a World of Choice

“Putting God Second addresses the most critical issues facing religion in the modern world. As Hartman brilliantly argues, it’s too simplistic to join Hitchens, Dawkins, and Harris in reducing religion to the cause of centuries of bloodshed and hatred, or to side with those who only see in religion the inspiring teachings that ennoble humanity. Instead, Hartman offers a sophisticated and compelling analysis of the flaws within Jewish scriptures as a model for other monotheistic faiths, and outlines a remarkable new way to keep our relationship with God from overshadowing our responsibility to God’s many children.”
—Rabbi Rick Jacobs, president of the Union for Reform Judaism

“A work of deep faith that takes today’s challenges to faith head on—rooted in the tradition, yet alive to the new. Religious self-criticism is essential to twenty-first-century peace. Rabbi Donniel Hartman shows why and how.”
—James Carroll, author of Christ Actually

“Putting God Second is a must-read book for anyone who is looking for a fresh take on religion and religiosity of all kinds. Its powerful argument invites people of all faiths (or no faith) to re-examine the basic premises of religion altogether. Only a faithful Jew could put forth such a challenge, and Rabbi Hartman does it spectacularly.”
—Abdullah T. Antepli, Chief Representative of Muslim Affairs, Duke University

Rabbi Dr. Donniel Hartman is president of the Shalom Hartman Institute and the author of The Boundaries of Judaism, coeditor of Judaism and the Challenges of Modern Life, and coauthor of Spheres of Jewish Identity. He is the founder of some of the most extensive education, training, and enrichment programs for scholars, educators, rabbis, and religious and lay leaders in Israel and North America, and is a prominent essayist, blogger, and lecturer on issues of Israeli politics and policy, Judaism, and the Jewish community.
Loading...
or
Not Currently Available for Direct Purchase