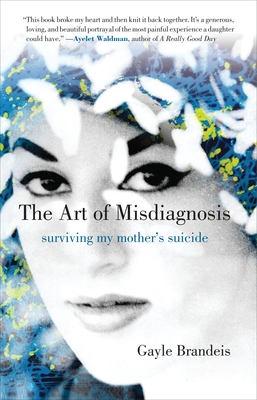 The Art of Misdiagnosis (Paperback)

Gayle Brandeis’s mother disappeared just after Gayle gave birth to her youngest child. Several days later, her body was found: she had hanged herself in the utility closet of a Pasadena parking garage. In this searing, formally inventive memoir, Gayle describes the dissonance between being a new mother, a sweet-smelling infant at her chest, and a grieving daughter trying to piece together what happened, who her mother was, and all she had and hadn’t understood about her.

Around the time of her suicide, Gayle’s mother had been working on a documentary about the rare illnesses she thought ravaged her family: porphyria and Ehlers-Danlos syndrome. In The Art of Misdiagnosis, taking its title from her mother’s documentary, Gayle braids together her own narration of the charged weeks surrounding her mother’s suicide, transcripts of her mother’s documentary, research into delusional and factitious disorders, and Gayle’s own experience with misdiagnosis and illness (both fabricated and real). Slowly and expertly, The Art of Misdiagnosis peels back the complicated layers of deception and complicity, of physical and mental illness in Gayle’s family, to show how she and her mother had misdiagnosed one another.

Gayle’s memoir is both a compelling search into the mystery of one’s own family and a life-affirming story of the relief discovered through breaking familial and personal silences. Written by a gifted stylist, The Art of Misdiagnosis delves into the tangled mysteries of disease, mental illness, and suicide and comes out the other side with grace.

Gayle Brandeis is the author of Fruitflesh: Seeds of Inspiration for Women Who Write and the novels The Book of Dead Birds, which won the Bellwether Prize for Fiction of Social Engagement (judged by Toni Morrison, Maxine Hong Kingston, and contest founder Barbara Kingsolver), Self Storage, Delta Girls and My Life with the Lincolns, which received a Silver Nautilus Book Award and was chosen as a Read on Wisconsin pick, as well as a collection of poetry, The Selfless Bliss of the Body. Her essays, poems and short fiction have been widely published and have received numerous honors, including a Barbara Mandigo Kelly Peace Poetry Award, the QPB/Story Magazine Short Story Award, and a Notable mention in The Best American Essays 2016. She teaches in the low residency MFA programs at Antioch University, Los Angeles and Sierra Nevada College, where she was named Distinguished Visiting Professor/Writer in Residence. Gayle served as Inlandia Literary Laureate from 2012-2014 and was called a Writer Who Makes a Difference by The Writer Magazine.

Praise For The Art of Misdiagnosis: Surviving My Mother's Suicide…

“A uniquely graceful, gorgeously written and composed collage of grief, misunderstanding, love, and an attempt at familial closure through art and prose.”
—Kirkus Reviews, Starred Review

“Her story is chilling and poignant, and not one dash sentimental. Exemplifying the best of the memoir genre, Brandeis tells a story that is both intimately specific, even peculiar at times, and yet is intensely relatable.”
—ForeWord Reviews, Starred Review

“It’s a complex and captivating memoir that touches on motherhood, mental health, and love, among other relatable issues.”
—Bustle

“The Art of Misdiagnosis is a gripping and deeply felt memoir that demonstrates how the very act of writing can pull one from the depths of tragedy and toward the light of compassion. In the words of Arlene Baylen Brandeis herself, ‘all is preparation for love.’”
—Shelf Awareness

“The Art of Misdiagnosis: Surviving My Mother’s Suicide by Gayle Brandeis is about making sense of grief when absence is also a relief . . . a sophisticated and intriguing memoir.”
—Times Literary Supplement

“This book broke my heart and then knit it back together. It’s a generous, loving, and beautiful portrayal of the most painful experience a daughter could have.”
—Ayelet Waldman, author of A Really Good Day

“John Cassavetes offers this: ‘When a character can’t find his way home, that’s where the story begins. . . .’ Gayle Brandeis begins her story where it ends, then slowly—thoughtfully, painfully, lovingly—works her way back. It all circles around a handful of days, where everything happens—birth, death, truth, transformation. We tumble along with her, sometimes lost, sometime home, seeming to encounter insights as they happen, as she encounters them. This book is a revelation—you can feel it in your body.”
—Nick Flynn, author of Another Bullshit Night in Suck City

—In her gorgeous and unforgettable memoir, The Art of Misdiagnosis, Gayle Brandeis captures the unruly mess and terrifying beauty of family love. With breathtaking honesty, she uncovers clues, exhumes long-buried secrets, and searches for meaning in the aftermath of her mother’s suicide. A profound meditation on illness, healing, and the luminous chaos of the human heart. It is one of the most moving and thought-provoking memoirs I have ever read.”
—Alice Eve Cohen, author of What I Thought I Knew and The Year My Mother Came Back

“The Art of Misdiagnosis is Gayle Brandeis’s masterpiece, and it reads with the urgency of a literary thriller. Here Brandeis delves into the liminal place—between life and death, between psychosis and sanity, between love and guilt—with a poet’s heart and a detective’s courage. If you’ve ever watched someone you love unravel, or if you’ve asked the echoing ‘why?’ of suicide, you’ll find home in these pages.”
—Ariel Gore, author of The End of Eve

“Gayle Brandeis dances on the edge of memory’s razor: both candid and eloquent, The Art of Misdiagnosis never fails to cut down to the truth. I was both moved and enlightened by this unflinching memoir.”
—Linda Gray Sexton, bestselling author of Searching for Mercy Street: My Journey Back To My Mother, Anne Sexton and Half in Love: Surviving The Legacy Of Suicide

Gayle Brandeis is one of the smartest and most compassionate voices in nonfiction today. Her insights about how we live as women, as mothers and daughters, and as human beings cut straight to the heart. Everyone needs to read her.”
—Hope Edelman, internationally bestselling author of Motherless Daughters

“Deeply compassionate, and breathtakingly brave, Brandeis’s memoir is a raw, unflinching trip down a rabbit hole, unspooling both the chaotic life of her mentally unbalanced mother, and how her mother’s obsession with physical illness crash-landed Brandeis’s own life—and health—from girlhood to marriage and motherhood. About the stories we desperately need to make of our lives in order to survive, and how the body sometimes speaks what the mind dare not, this is also an extraordinarily moving portrait of a troubled mother, and of the daughter who fearlessly, poetically, writes her way into discovering her truest self. Truthfully, I am in awe.”
—Caroline Leavitt, New York Times Bestselling author of Is This Tomorrow and Pictures of You
or support indie stores by buying on
Copyright © 2020 American Booksellers Association