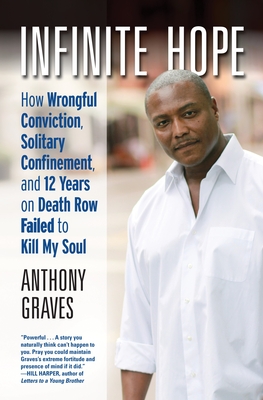 How Wrongful Conviction, Solitary Confinement, and 12 Years on Death Row Failed to Kill My Soul

Written by a wrongfully convicted man who spent 16 years in solitary confinement and 12 years on death row, a powerful memoir about fighting for—and winning—exoneration.

In the summer of 1992, a grandmother, a teenage girl, and four children under the age of ten were beaten and stabbed to death in Somerville, Texas. The perpetrator set the house on fire to cover his tracks, deepening the heinousness of the crime and rocking the tiny community to its core. Authorities were eager to make an arrest. Five days later, Anthony Graves was in custody.

Graves, then twenty-six years old and without an attorney, was certain that his innocence was obvious. He did not know the victims, he had no knowledge about the crime, and he had an airtight alibi with witnesses. There was also no physical evidence linking him to the scene. Yet Graves was indicted, convicted of capital murder, sentenced to death, and, over the course of twelve years on death row, given two execution dates. He was not freed for eighteen years, two months, four days.

Through years of suffering the whims of rogue prosecutors, vote-hungry district attorneys, and Texas State Rangers who played by their own rules, Graves was frequently exposed to the dire realities of being poor and black in the criminal justice system. He witnessed fellow inmates who became his friends and confidants be taken away, one by one, to their deaths. And he missed out on seeing his three young sons mature into men. Graves’s only solace was his infinite hope that the state would not execute him for a crime he did not commit.

To maintain his dignity and sanity, Graves made sure as many people as possible knew about his case. He wrote letters to whomever he thought would listen. Pen pals in countries all over the world became allies, and he attracted the attention of a savvy legal team that overcame setback after setback, chiseling away at the state’s faulty case against him. Everyone’s efforts eventually worked. After Graves’s exoneration, the original prosecutor on his case was disbarred.

Graves is one of a growing number of innocent people exonerated from death row. The moving account of his saga—of his ultimate fight for freedom from inside a prison cell—is as haunting as it is poignant, and as shameful to the legal system as it is inspiring to those on the losing end of it.

Praise For Infinite Hope: How Wrongful Conviction, Solitary Confinement, and 12 Years on Death Row Failed to Kill My Soul…

“A well-written, matter-of-fact, inspirational account of how a man prevailed against a criminal justice system that is deeply flawed.”
—Kirkus Reviews, Starred Review

“[A] skilled and confident narrative. . . It’s [Graves’s] battle to overcome the hidden traumas and loss that makes this such a compelling page-turner.”
—Booklist

“Powerful . . . No matter your opinion on the merits of capital punishment, the horror Anthony Graves endured will move you to outrage. . . . It is a story you naturally think can’t happen to you. Pray you could maintain Graves’s extreme fortitude and presence of mind if it did.”
—Hill Harper, author of Letters to a Young Brother: Manifest Your Destiny

“Anthony Graves’s story is one of resilience in the face of injustice. For twelve years, Anthony was silenced and isolated [on death row]. Now he has found his freedom and his voice. Infinite Hope speaks powerfully of the need for reform. By telling his story, Anthony calls on all of us to prevent these injustices from being repeated.”
—US Senator Richard J. Durbin

“By now, everybody should know there are innocent people on death row. But never before has a book by one of those innocent men conveyed how easily this travesty can come about or the sheer terror these inmates face every hour of every day. Anthony Graves’s haunting memoir does exactly that. Infinite Hope will leave you aghast at the failure of our criminal justice system and in awe at Graves’s dignity and strength in the face of this failure.”
—David Dow, author of The Autobiography of an Execution

“Charged, convicted, and put on death row for a crime that he did not commit, Anthony Graves experienced all the brutality the criminal process could muster: fabricated evidence, corrupt prosecutors, callous police, indifferent courts. Even in the face of such unimaginable horrors, Graves refused to accept his fate or surrender his humanity. Infinite Hope is an indictment of American criminal law that will rattle you to the core and inspire you to action.”
—James Forman Jr., author of Locking Up Our Own: Crime and Punishment in Black America

Anthony Graves was wrongfully convicted of multiple homicides in 1992 and spent nearly two decades behind bars, including twelve years on Texas's death row. While still in prison, he cofounded Join Hands for Justice, a France-based activist group that led global efforts to prove his innocence. Graves's conviction and death sentence were overturned in 2006, and after four years of legal wrangling, he was fully exonerated and released in 2010. Since then, he has become a full-time advocate for criminal justice reform, testifying to the US Senate about the harms of solitary confinement, serving on the board of directors for the Houston Forensic Science Center, and working with the ACLU's Campaign for Smart Justice. Graves speaks widely and runs the Anthony Graves Foundation, which works to draw attention to problems within the American criminal justice system. He lives in Houston.
Loading...
or
Not Currently Available for Direct Purchase