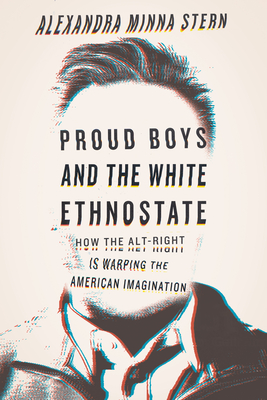 Proud Boys and the White Ethnostate

How the Alt-Right Is Warping the American Imagination

What is the alt-right? What do they believe, and how did they take center stage in the American social and political consciousness?

Historian Alexandra Minna Stern excavates the alt-right memes that have erupted online and digs to the root of the far right’s motivations: their deep-seated fear of an oncoming “white genocide” that can only be remedied through aggressive action to reclaim white power. The alt-right has expanded significantly throughout America’s cultural, political, and digital landscapes: racist, sexist, and homophobic beliefs that were previously unspeakable have become commonplace, normalized, and accepted—endangering American democracy and society as a whole. When asked to address the Proud Boys and growing far right violence, President Trump directed the group to “stand back and stand by;” and just two weeks before President Joe Biden’s inauguration, a white supremacist mob breached the US Capitol—earning praise from the Proud Boys leader amongst threats of future violence. In order to dismantle the destructive movement that has invaded our public consciousness and threatens American democracy, we must first understand the core beliefs that drive the alt-right.

Through careful analysis, Stern brings awareness to the underlying concepts that guide the alt-right and its overlapping forms of racism, xenophobia, and transphobia. She explains the key ideas of “red-pilling,” strategic trolling, gender essentialism, and the alt-right’s ultimate fantasy: a future where minorities have been “cleansed” from the body politic and a white ethnostate is established in the United States. By unearthing the hidden mechanisms that power white nationalism, Stern reveals just how pervasive the far right truly is.

Praise For Proud Boys and the White Ethnostate: How the Alt-Right Is Warping the American Imagination…

“An important study that extends the knowledge from other recent books that have demonstrated a stubbornly pervasive network of white nationalists.”
—Kirkus Reviews

“An important volume for anyone interested in the future of liberal democracy. Stern has fashioned an invaluable guide with which to unmask a new breed of racism.”
—Shelf Awareness

“Proud Boys and the White Ethnostate is the definitive guide to alt-right ideas today. Stern brilliantly documents how a younger generation of activists are repackaging the Far Right, waging a battle for cultural dominance. The internet is their home, where they mix fascist ideologies and faux scholarship to make their case for white/Christian/male dominance. Stern has analyzed an enormous swath of ethno-nationalist material, sparing the rest of us from having to engage in that odious task. Proud Boys is essential reading in the age of Trump.”
—Arlene Stein, author of Unbound: Transgender Men and the Remaking of Identity

“In this carefully researched book, the historian Alexandra Minna Stern studies a wide array of online web sites, documenting a rise in claims to whiteness as a basis of identity, as a claim to victimhood and as an argument for a ‘white ethnostate.’ Drawing ideas from films (‘red-pilling’ comes from The Matrix) and from the left (the need for ‘safe spaces’), the Alt-Right, she argues, is trying to normalize a frightening shift from talk of civic nationalism to talk of race-based nationalism. This is very important work we should all know about.”
—Arlie Hochschild, author of Strangers in Their Own Land: Anger and Mourning on the American Right, finalist for the National Book Award.

“Timely, well-researched, and insightful, Proud Boys and the White Ethnostate is a brilliant study of the alt-right’s beginnings and current attempts to push its message of racial separation, misogyny, white nationalism, and xenophobia into the American mainstream. It should be read in schools and book clubs across the nation.”
—Leo R. Chavez, author of The Latino Threat: Constructing Immigrants, Citizens, and the Nation

“Proud Boys and the White Ethnostate lays bare the complex intellectual, theoretical, and political commitments of an ascendant alt-right and its use of culture, history, and identity to build power and win broad public consent. At its heart it is a sober warning about the ways that violence, patriarchy, and white supremacy continue to shape the American political imagination.”
—Daniel Martinez HoSang, coauthor of Producers, Parasites, Patriots: Race and the New Right-Wing Politics of Precarity

Alexandra Minna Stern is the author of the award-winning Eugenic Nation: Faults and Frontiers of Better Breeding in Modern America and Telling Genes: The Story of Genetic Counseling in America. She has contributed her insight into eugenics, ethnicity, and social movements to dozens of scholarly essays and interviews. Stern is the Carroll Smith-Rosenberg Collegiate Professor of American Culture, History, and Women’s Studies at the University of Michigan, where she leads the acclaimed Sterilization and Social Justice Lab. Connect with her on her website minnastern.com.
Loading...
or support indie stores by buying on