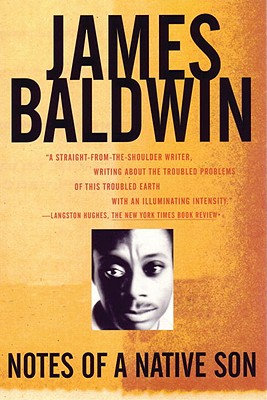 Notes of a Native Son

A new edition published on the twenty-fifth anniversary of Baldwin's death, including a new introduction by an important contemporary writer
Since its original publication in 1955, this first nonfiction collection of essays by James Baldwin remains an American classic. His impassioned essays on life in Harlem, the protest novel, movies, and African Americans abroad are as powerful today as when they were first written.
"A straight-from-the-shoulder writer, writing about the troubled problems of this troubled earth with an illuminating intensity." --Langston Hughes, "The New York Times Book Review"
"Written with bitter clarity and uncommon grace." --"Time.


Praise For Notes of a Native Son…

"He named for me the things you feel but couldn't utter. . . . Jimmy's essays articulated for the first time to white America what it meant to be American and a black American at the same time."—Henry Louis Gates, Jr.

"A straight-from-the-shoulder writer, writing about the troubled problems of this troubled earth with an illuminating intensity."—Langston Hughes, The New York Times Book Review

James Baldwin (1924-1987) was a novelist, essayist, playwright, poet, and social critic, and one of America's foremost writers. His essays, such as "Notes of a Native Son" (1955), explore palpable yet unspoken intricacies of racial, sexual, and class distinctions in Western societies, most notably in mid-twentieth-century America. A Harlem, New York, native, he primarily made his home in the south of France.

His novels include "Giovanni's Room" (1956), about a white American expatriate who must come to terms with his homosexuality, and "Another Country" (1962), about racial and gay sexual tensions among New York intellectuals. His inclusion of gay themes resulted in much savage criticism from the black community. "Going to Meet the Man" (1965) and "Tell Me How Long the Train's Been Gone" (1968) provided powerful descriptions of American racism. As an openly gay man, he became increasingly outspoken in condemning discrimination against lesbian and gay people.
Loading...
or support indie stores by buying on
(This book is on backorder)