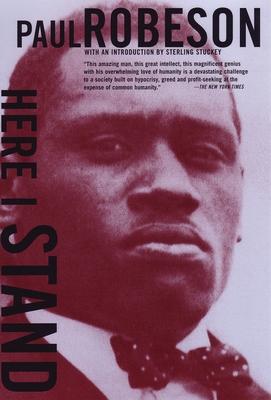 Robeson's international achievements as a singer and actor in starring roles on stage and screen made him the most celebrated black American of his day, but his outspoken criticism of racism in the United States, his strong support of African independence, and his fascination with the Soviet Union placed him under the debilitating scrutiny of McCarthyism. Blacklisted, his famed voice silenced, Here I Stand offered a bold answer to his accusers. It remains today a defiant challenge to the prevailing fear and racism that continues to characterize American society.

Praise For Here I Stand…

This amazing man, this great intellect, this magnificent genius with his overwhelming love of humanity is a devastating challenge to a society built on hypocrisy, greed and profit-seeking at the expense of common humanity. -The New York Times

"[Robeson's] nobility, his language, his encouragement and his praise put me forever in his debt because it inspired me fully . . . to be like him, and to use my life as he had used his, to put into it the commitment of the liberation of his people and all people." -Harry Belafonte in Restoring Hope

"Robeson's book is a perennial, first published in 1958, and now a voice from a different time. It anticipates for black persons the 'moral support of the American majority' with an intensity that now seems evangelical. It's full of a probably tragic hope. It should be read." -The Boston Globe

Paul Leroy Robeson (April 9, 1898 – January 23, 1976) was an American concert singer (bass), recording artist, actor, athlete, scholar who was an advocate for the Civil Rights Movement in the first half of the 20th century. He gained international attention for his work in the arts and he merged his artistic career with political activism to speak out for the equality of minorities and the rights of workers throughout the world. His friendship with the Soviet Union and the Soviet peoples plus criticism of the lack of progress in civil rights in the United States at the outset of the Cold War and during the age of McCarthyism brought scrutiny, conflict and retribution from the American government. His public persona became diminished, his income plummeted and he faced isolation from the Civil Rights Movement in the second half of the 20th century.
Loading...
or support indie stores by buying on