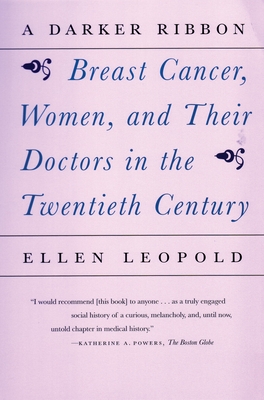 A Twentieth-Century Story of Breast Cancer, Women, and Their Doctors

The first cultural history of breast cancer, this book examines the social attitudes and medical treatments that together defined the modern relationship between women with the disease and their doctors. At the heart of the book are two unpublished correspondences-one between Barbara Mueller, a woman diagnosed with breast cancer eighty years ago, and her surgeon, William Steward Halsted, father of the radical mastectomy, and the other between Rachel Carson, who was writing Silent Spring as she was battling breast cancer, and her personal physician George Crile, Jr.

Praise For A Darker Ribbon: A Twentieth-Century Story of Breast Cancer, Women, and Their Doctors…

I would recommend [this book] to anyone . . . as a truly engaged social history of a curious, melancholy, and, until now, untold chapter in medical history. -Katherine A. Powers, The Boston Globe

"Why did it take most of the twentieth century for breast cancer to move from being viewed as a disease that affected women to a woman's disease? How do we explain the stubborn reluctance of American women to understand breast cancer as a feminist issue? Leopold's answers to these questions, along with her skillful attempt to fill a historiographical void in the breast cancer literature, make for engaging reading." -Regina Morantz-Sanchez, The Women's Review of Books

"The apposition of Barbara Mueller's interaction with Halsted and Rachel Carson's with Crile is compelling and poignant." -Jerome Groopman, The New York Times Book Review

"A Darker Ribbon is an invaluable tool and a powerful call to arms."
-National Women's Review

"A path-breaking inquiry into the sociopolitical history of cancer writ large. . . . Read the book as a story about how the cancer establishment got the active support of the American population, and you've got a new window on twentieth-century medical history." -Deborah Stone, The American Prospect

Ellen Leopold is a member of the Women's Community Cancer Project in Cambridge, Massachusetts, and has written breast cancer and women's health-care articles for The Nation, the Chicago Tribune, and the Boston Globe, among others.
Loading...
or
Not Currently Available for Direct Purchase