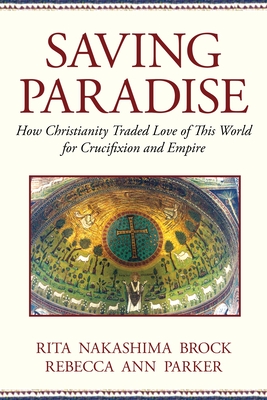 How Christianity Traded Love of This World for Crucifixion and Empire

One of Publishers Weekly's Best Books of the Year

During their first millennium, Christians filled their sanctuaries with images of Christ as a living presence—as a shepherd, teacher, healer, or an enthroned god. He is serene and surrounded by lush scenes, depictions of this world as paradise. Yet once he appeared as crucified, dying was virtually all Jesus seemed able to do, and paradise disappeared from the earth.

Saving Paradise turns a fascinating new lens on Christianity, from its first centuries to the present day, asking how its early vision of beauty evolved into a vision of torture, and what changes in society and theology marked that evolution. It also retrieves, for today, a life-affirming Christianity that the world sorely needs.

Praise For Saving Paradise: How Christianity Traded Love of This World for Crucifixion and Empire…

“In the best tradition of theological inquiry, Saving Paradise provides a history and a theology that helps us engage the pressing problems of the world. . . . In Saving Paradise, Brock and Parker have brought forward a bright thread of the Christian tapestry that had been in the background, largely ignored. In so doing they have made accessible rich and vivid theological resources.”
—Margaret R. Miles, Christian Century

“Saving Paradise offers eye-opening explorations of the mixture of spiritual vision and myopia that marked many of the great figures of Western Christianity. Its rich text and the additional material in its notes should spur readers to examine both the darkness and the light that can be found in all of us.”
—Darrell Turner, National Catholic Reporter

“Brock and Parker urge readers to see church history in a new light, with an eye toward social justice. . . . By re-emphasizing early Christians' focus on paradise, on the kingdom of God on Earth, the authors are convinced they are reclaiming authentic 'traditional' Christianity. It's a controversial thesis, deserving of debate and study.”
—Douglas Todd, Religion News Services

“This powerful, unprecedented, and compelling book brings real Christianity out of the shadows.”
—George Lakoff, author of Don't Think of an Elephant!

“Only rarely is a single book an event. This book is such a rarity.”
—Professor Daniel C. Maguire, author of A Moral Creed for All Christians

Rebecca Ann Parker was President of and Professor of Theology at Starr King School for the Ministry in Berkeley, California, until 2014, and coauthor of Proverbs of Ashes: Violence, Redemptive Suffering, and the Search for What Saves Us and Saving Paradise: How Christianity Traded Love of This World for Crucifixion and Empire. An ordained United Methodist minister, Parker has dual fellowship with the United Methodist Church and the Unitarian Universalist Association. She currently serves on the board of an interfaith think tank focused on progressive religion and politics called Faith Voices for the Common Good.

Rita Nakashima Brock is Research Professor of Theology and Culture and Director of the Soul Repair Center at Brite Divinity School, Ft. Worth, Texas. She is author, with Gabriella Lettini, of Soul Repair: Recovering from Moral Injury after War and author, with Rebecca Ann Parker, of Proverbs of Ashes: Violence, Redemptive Suffering, and the Search for What Saves Us and Saving Paradise: How Christianity Traded Love of This World for Crucifixion and Empire. She lives in Oakland, California.
Loading...
or
Not Currently Available for Direct Purchase