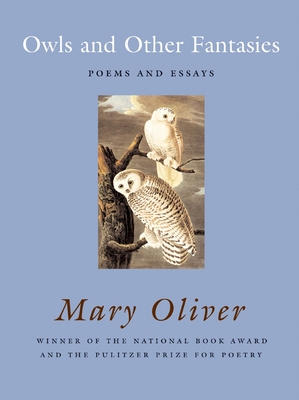 Owls and Other Fantasies (Hardcover)

Within these pages Mary Oliver collects twenty-six of her poems about the birds that have been such an important part of her life-hawks, hummingbirds, and herons; kingfishers, catbirds, and crows; swans, swallows and, of course, the snowy owl, among a dozen others-including ten poems that have never before been collected. She adds two beautifully crafted essays, "Owls," selected for the Best American Essays series, and "Bird," a new essay that will surely take its place among the classics of the genre.

In the words of the poet Stanley Kunitz, "Mary Oliver's poetry is fine and deep; it reads like a blessing. Her special gift is to connect us with our sources in the natural world, its beauties and terrors and mysteries and consolations."

For anyone who values poetry and essays, for anyone who cares about birds, Owls and Other Fantasies will be a treasured gift; for those who love both, it will be essential reading.

Praise For Owls and Other Fantasies: Poems and Essays…

Mary Oliver is beautiful and accurate in this book of poetry and prose about birds . . . all rendered with the precision of a line-drawing of a single feather that puts the entire wing into perspective. --Orion

"Oliver has gained enormous popularity in recent years for the accessible yet highly articulate and profound treatment she gives each poem . . . This new title will bring much pleasure to the many readers who claim Oliver as their favorite poet, as well as to people new to her work." —Library Journal

"What we have here are moral essays in prose and verse, passionate meditations on the conduct of life. You will be the wiser—as I believe I am—for having read them." --Frank Wilson, Philadephia Inquirer
or
Not Currently Available for Direct Purchase
Copyright © 2020 American Booksellers Association