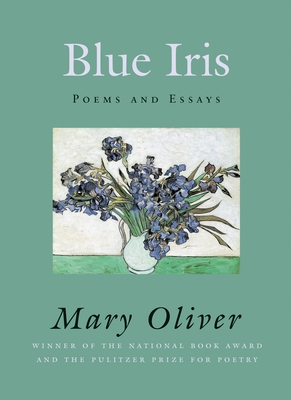 A rich collection of ten poems, two essays, and two dozen of Mary Oliver's classic works on flowers, trees, and plants of all sorts, elegantly illustrated, Blue Iris is the essential companion to Owls and Other Fantasies, one of the best-selling volumes of poetry of 2003 and a Book Sense 76 selection.

Blue Iris fortuitously offers an extended sequence and new contexts for a writer whose precise eye and instinct for surprising images have made her one of the best practitioners of the lyrical revelation . . . Oliver continues to earn applause and admiration for continuing to provide redemptive meditation and supple praises for nature in a time when so much is under threat.--R.T. Smith, Shenandoah

"Salvation, in Mary Oliver's poems, consists of the living of a natural life, the dying of a natural death, and the ability to look clearly in both directions while keeping the two processes in balance."--Jay Rogoff, Southern Review

"Mary Oliver's poems are natural growths out of a loam of perception and feeling, and instinctive skill with language makes them seem effortless. Reading them is a sensual delight."--May Swenson

"The gift of Oliver's poetry is that she communicates the beauty she finds in the world and makes it unforgettable."
-Miami Herald

"These 32 poems and four essays offer rich meditations on flowers in nature, showing how plant life reflects the life of the human heart . . . A companion to Oliver's recent Owls and Other Fantasies: Poems and Essays, this work presents poetry in free verse, which Oliver has perfected in all of its musicality and rhythm."—Library Journal