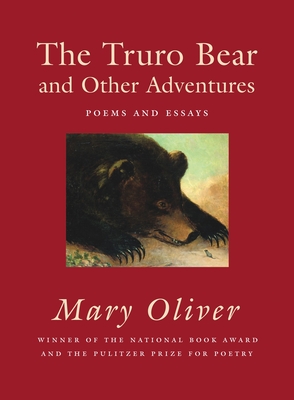 The Truro Bear and Other Adventures

The Truro Bear and Other Adventures, a companion volume to Owls and Other Fantasies and Blue Iris, brings together ten new poems, thirty-five of Oliver's classic poems, and two essays all about mammals, insects, and reptiles. The award-winning poet considers beasts of all kinds: bears, snakes, spiders, porcupines, humpback whales, hermit crabs, and, of course, her beloved but disobedient little dog, Percy.

Praise For The Truro Bear and Other Adventures: Poems and Essays…

The pleasures that await the reader just discovering the work of the Pulitzer-prize-winning poet are those delivered by her previous 18 volumes: her keen eye for telling detail, the surprise of the unexpected and, most important, the authoritative voice that portrays our world as both ordinary and enchanted, full of natural beauty and supernatural holiness.—Angela O'Donnell, America magazine

"From the small, the curious, and the commonly overlooked—grasshoppers, snow crickets, and whelks, for example—to the wild and intimidating, like coyotes, and, of course, the possibly mythical bear that haunts the Truro woods, the natural world is made more real and dangerous and, yet, inexplicably inviting in these poems. . . . There is even a baker's dozen of poems about Percy, her dog, a lovable recurring character in her work. In all, this book is an affirmation."—Library Journal, starred review

"Mary Oliver ranks among the finest poets the English language has ever produced. . . . Her poetry is rigorous, beautiful, well written, and offers genuine insights into the natural world."—Eli Lehrer, The Weekly Standard

"Mary Oliver's poetry is fine and deep; it reads like a blessing. Her special gift is to connect us with our sources in the natural world, its beauties and terrors and mysteries and consolations."—Stanley Kunitz

"Like Henry David Thoreau of Transcendentalist fame she is a naturalist whose attention to what used to be called the Book of Nature borders on both devotion and experimentation. Her poems . . . speak about the mysteries of mortality in a language that feels like home. . . . Mindfulness seems to be Oliver's métier, looking and listening her scientific method and contemplative practice."—Stephen Prothero, Search magazine