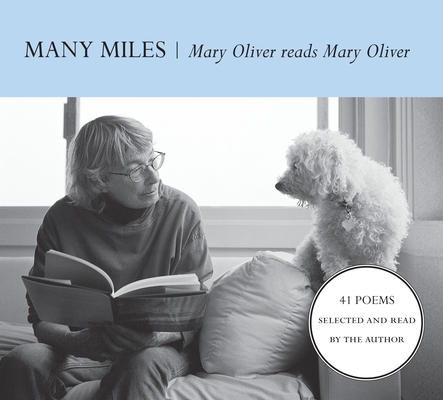 Following the success of At Blackwater Pond, this second CD from best-selling poet Mary Oliver contains a selection of thirty-seven previously published poems and four as yet uncollected, read by the poet in her steady, magnetic voice. Oliver recites from the full range of her poetry-from her classic nature writing, to her verses for her mischievous bichon Percy, to her ever-deepening spiritual poems. The CD comes in a handsome full-cloth package that includes a booklet with an introductory essay by the poet on the magical dynamic between speaker and listener, a table of contents, text of the title poem, and a photo of the poet. Many Miles will be a most welcome addition to the collections of her readers.

Steep some tea, curl up on the couch, and listen. Listen as Mary Oliver bears witness to grace and wonder within and without. Savor her words. Let them wash over you, buoy you, remind you what truly matters. Packaged as a CD-sized hardcover book, this exquisite audio collection is a perfect gift—for oneself or another—inspiring us to live from the heart of wonder, to stand where we are and be blessed.—Nan Macy, Village Books, Bellingham, WA

"Gloriously alive, inquisitive, and welcoming. A prolific and cherished poet, [Oliver] makes readers feel as though they've been part of the quest for wisdom and grace she records in her lucid, giving, prayerful poems.... Within each lifting lyric, Oliver declares all of life holy."—Donna Seaman, Booklist